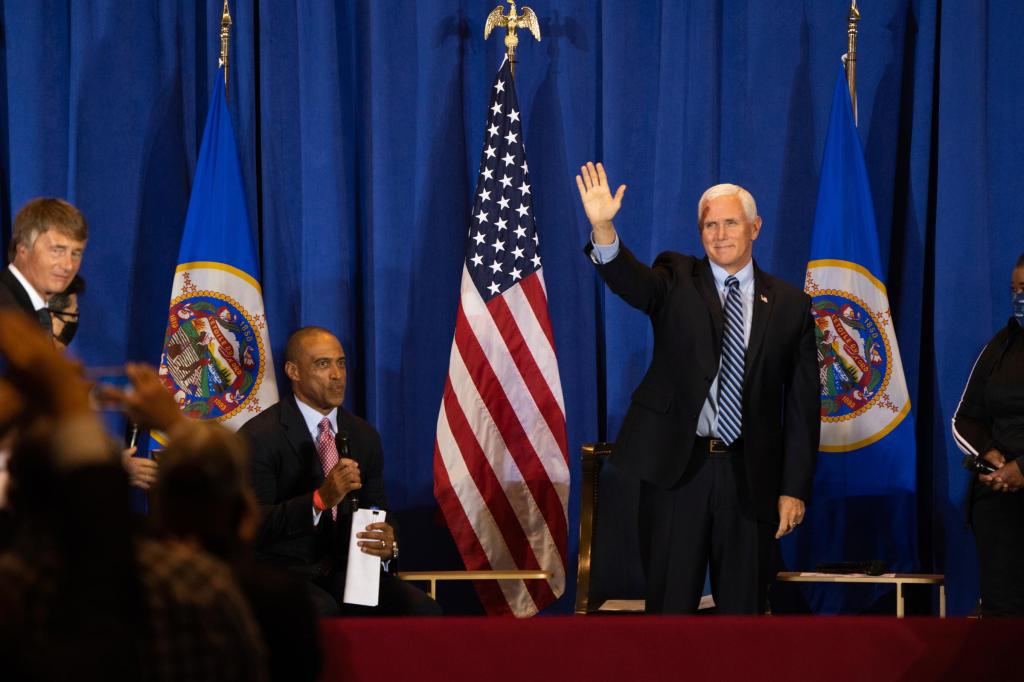 Vice President Mike Pence and Ivanka Trump swung through the Twin Cities metro Thursday with a law-and-order message, seeking to frame the civil unrest following George Floyd’s killing in Minneapolis as most notably one of looting and riots.

The narrative that Pence and President Donald Trump’s daughter carried is consistent with the president’s desire to focus less on racial justice and police conduct toward minorities and more on the violence that erupted from demonstrations.

“I promise you, with President Donald Trump in the White House, we are going to have law and order in every city in every state in this country for every American of every race and creed and color, so help us God,” Pence said in opening remarks of the event, which was billed as a ” ‘Cops for Trump’ listening session.”

Minnesota Democrats attacked the Republican narrative Thursday, accusing the White House of ignoring the public safety threat that has killed more than 200,000 Americans in a matter of months: the coronavirus pandemic.

Indeed, there was nary more than a passing mention of the virus at Thursday’s campaign event, which was held in the indoor ballroom of the InterContinental Hotel at Minneapolis St. Paul International Airport. The event appeared to violate Gov. Tim Walz’s orders on indoor gatherings, with an apparent crowd of about 350 people, well above the 250-person limit. Chairs were not spaced six feet apart, and many in the crowd did not wear masks for the more than two hours they were assembled.

During a Democratic-Farmer-Labor Party conference call before the Pence event, Andy Slavitt, a Minnesotan who served as health care adviser to former President Barack Obama, said, “My fear is that in these types of situations, President Trump and Vice President Pence come and use them as distractions, number one, and then also, in the process, create more heat and more fear.”

In May, Floyd, a Black man suspected of passing a counterfeit $20 bill, died after a white Minneapolis police officer pressed his knee to Floyd’s neck for more than seven minutes while Floyd pleaded he couldn’t breathe. Four former cops have been charged in his death and are awaiting trial.

While throngs demonstrated peacefully, untold numbers resorted to violence that led to a total breakdown of law and order in parts of Minneapolis and St. Paul that lasted more than two days.

Some 1,500 businesses were damaged, causing at least $500 million in damage, and a Minneapolis police precinct was overrun and torched by a mob.

Thursday’s event featured three local business owners, who described violence that sprung from protests following Floyd’s death. Two of the businesses were damaged, including Flora’s Hair Design in North Minneapolis. Before the official event, Pence’s motorcade made an unannounced stop at the site of the former business, which was reduced to a pile of rubble after it was set ablaze in the violence in late May, owner Flora Westbrooks told Pence.

Heartbreaking to see Flora’s Hair Design in Minneapolis. We are with you. pic.twitter.com/6gf23mSL9U

“We were living the American dream here,” Westbrooks, who started the salon in 1986, said during the panel discussion. “It was horrible, to stand there and see your business burned, everything you worked for.”

While Pence stated his steadfast support for Trump numerous times, his rhetoric is decidedly less bombastic than Trump’s.

In fact, while Thursday sought to cast former Vice President Joe Biden — Trump’s Democratic opponent in the election — as anti-police and pro mob violence, the two men’s words on the duality of Floyd’s killing and the violence that followed can be strikingly similar at times.

But their audiences hear quite different parts.

“Protesting such brutality is right and necessary. It’s an utterly American response. But burning down communities and needless destruction is not. Violence that endangers lives is not.”

That’s what Biden said in late May as the violence that erupted in Minneapolis spread across the country.

On Thursday, here’s what Pence said:

“I wanna be clear: There’s no excuse for what happened to George Floyd, and justice will be served.” The crowd applauded.

Pence continued, raising his voice a level: “But there’s also no excuse for the rioting and looting and violence that ensured, and those who engage in acts like these will be held accountable to the fullest extent of the law.”

The crowd erupted in cheers.

Pence’s appearance followed an event earlier in the day at a manufacturing facility in Eau Claire, Wis. Ivanka Trump was scheduled at an event in Winona, Minn., Friday.