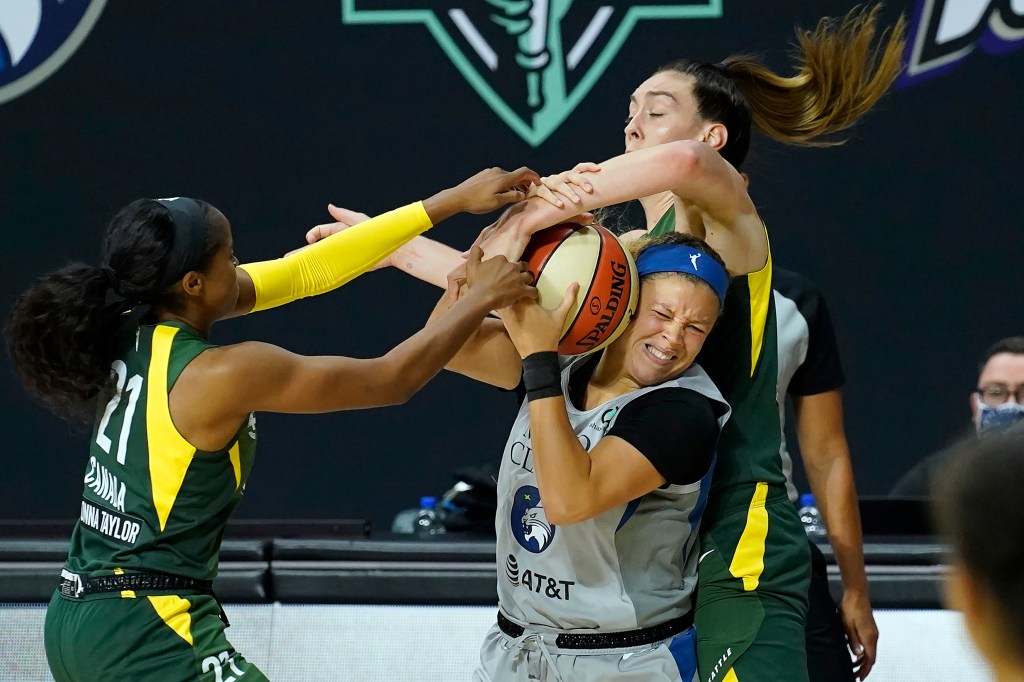 Resiliency has been the trademark of the Lynx all season.

It’s about to be put to the ultimate test.

After Thursday’s 89-79 loss to Seattle, Minnesota trails the overwhelming title favorite 2-0 and must beat the Storm three straight times to avoid elimination.

That won’t be easy.

After a strong offensive showing in Game 1, Minnesota struggled to score for long stretches Thursday, which was reminiscent of the two regular season matchups between the two teams.

The Lynx shot just 29 percent in the first half and didn’t get much from its backcourt early as Odyssey Sims, Crystal Dangerfield and Rachel Banham all struggled to get going.

“Offensively, you’ve got to be really good to beat Seattle. … You’ve got to go toe to toe with them offensively, and we didn’t get that done,” Lynx coach Cheryl Reeve said. “They make you have to make every shot, and shoot 50 percent along with them.”

Damiris Dantas finished with 23 points and seven rebounds, while Sims added 18. Minnesota went 13 for 28 from deep and committed just 10 turnovers — though those turned into 18 points for Seattle — but struggled to find good looks inside the arc.

Napheesa Collier sat the final six minutes of the first half with three fouls. Without their best player, the Lynx were outscored 14-0 to close the second quarter and trailed by 13 at the break. Seattle’s lead ballooned to 21 early in the third quarter.

The Lynx rallied, as they’re known to do. Strong defense and a rash of made triples trimmed Seattle’s lead to five points in a span of just four minutes.

“That was something that we could’ve been doing the whole game,” Dangerfield said. “Three in a row stops is what we want to do, get the rebound and fly up the floor. That’s what we were doing. We had them scrambling.”

Minnesota had opportunities to cut the deficit down to a single possession but struggles at the free-throw line stunted the rally, and the Lynx struggled to make a strong push in the fourth. Jewell Loyd scored 20 points to lead four Storm starters who finished in double figures. Seattle shot 51 percent from the field and out-rebounded Minnesota 37-28.

“We’ve got one more crack at this,” Reeve said. “We’ve got to win a game. Sunday will be that day.”

Reeve takes solace in knowing her starters have played Seattle’s star-studded first five to about a draw through two games. A little more production from the bench, and the Lynx could make things interesting. The reality is, if there is a team built to come back from the dead, it’s probably this one.

“You guys have been saying that we’re the team that comes back from 20 down, 10 down,” Collier said. “Maybe we’re just late for that.”

Sylvia Fowles missed another game with the calf injury that’s sidelined her for much of the season. Her availability for the remainder of the series is still unknown.