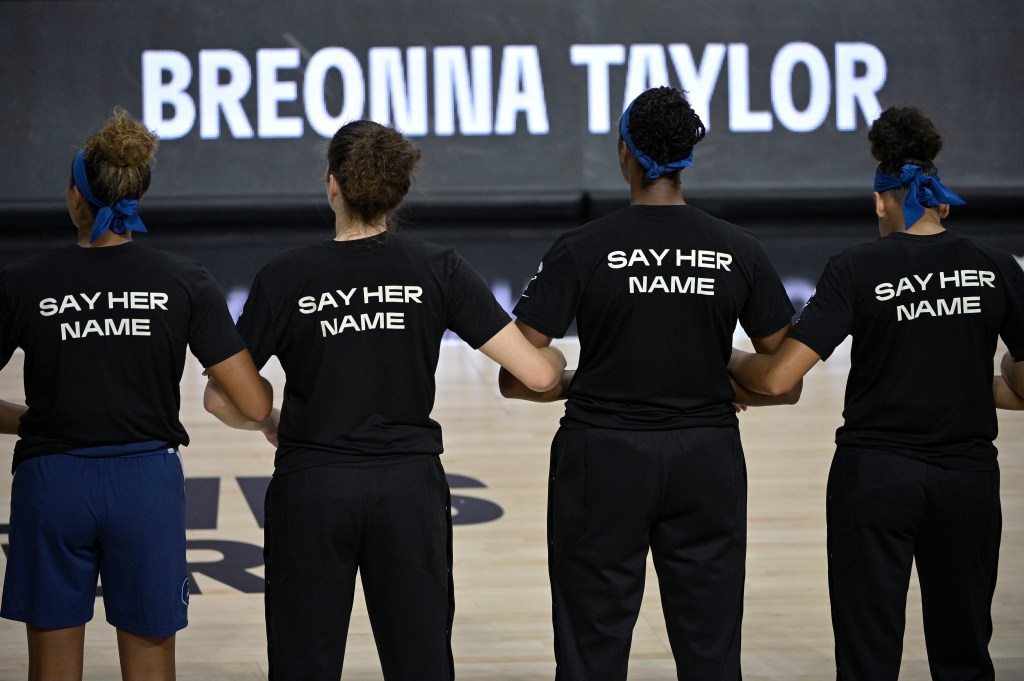 The Lynx, and really the WNBA at large, dedicated this season in the bubble in Bradenton, Fla., to Breonna Taylor, who was shot and killed by police in her Kentucky home earlier this year during a late-night police search.

All season, the Lynx advocated for justice for Taylor, and reform of the laws that helped lead to her killing. So when only one detective was indicted this week on charges of reckless endangerment not for Taylor’s killing, but for the shots fired that flew into a neighboring apartment, Lynx coach Cheryl Reeve said “you can imagine the disappointment that we all have felt.”

“I would just say the vibe of what everyone has been saying is that justice wasn’t served,” Lynx rookie guard Crystal Dangerfield said.

“We dedicated the season to Breonna Taylor and trying to obviously push for justice in the case, and obviously we feel like that just didn’t happen,” Reeve said. “It’s disappointing, but we have to continue to push and fight for change.”

That fight doesn’t stop here, Reeve insisted. The coach and general manager continues dig into issues and gather information, as do her players. The next thing on her list is transparency. What exactly was Kentucky attorney general Daniel Cameron faced with? What things did he hear?

“Let’s get transparency so we all understand,” Reeve said. “Obviously we don’t feel good about it, but we need to understand exactly what changes need to come from this to continue to honor the life of Breonna Taylor, and we’re not going to stop until we do that.”

As Reeve continues to educate herself about these issues of racial injustice and police brutality, she finds more changes that need addressing. Reeve said there are laws in the book that are simply outdated, and the way the public is policed needs adjustment.

“Evolve, evolve as a society. It’s not OK anymore. It’s a shame that we accepted it back then,” Reeve said. “Let’s recognize the things that are happening and bring about meaningful change so we can all live an equal life and not have privileges or discrepancies that are so pronounced as opposed to people just wanting to live their lives and not fear death as a result of policing.”

Reeve said this isn’t about choosing a side. She is “sick and tired” of people who refuse to acknowledge what’s happening or say they simply “don’t want to hear about it.”

” ‘Stop throwing it in my face, it’s not our problem. We weren’t a part of slavery,’ ” Reeve said she hears. “All those silly things that people say. We have the pandemic, but this is a pandemic of other sorts. We have so many people that want to bring about change and be a part of solutions that we’ve got to use the power of that and find a common ground and figure out how we can have meaningful change.”

Reeve said change can be achieved by understanding the issues, understanding the specific laws that need changing and bringing them straight to the attention of lawmakers. And then, of course, there is November.

“If we want things to change, it has to change on a deeper level,” Lynx guard Rachel Banham said. “I just keep telling people ‘Get out and vote. Continue to educate yourself on everything that’s involved in it and just continue to share love and be compassionate to everybody.’ ”

“We need to understand exactly what changes need to come from this to continue to honor the life of Breonna Taylor,” Reeve said, “and we’re not going to stop until we do that.”