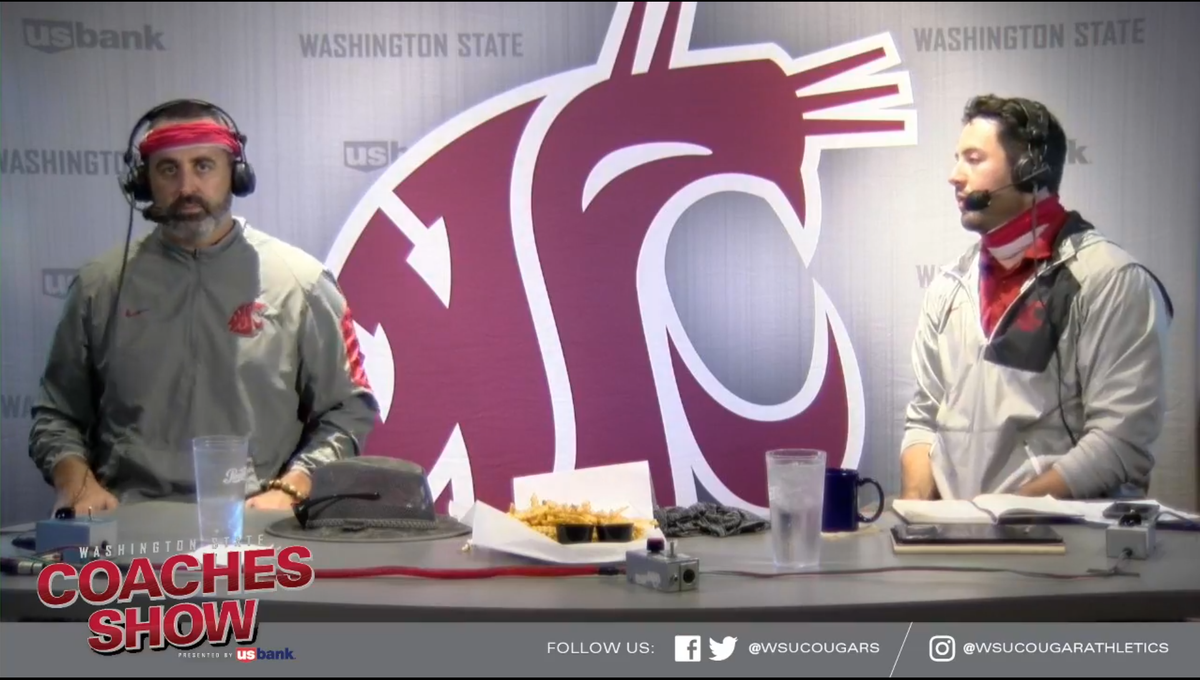 Less than two hours after presidents and chancellors in the Pac-12 Conference voted to resume a seven-game football season, starting the weekend of Nov. 6-7, first-year Washington State football coach Nick Rolovich took a seat with radio broadcaster Matt Chazanow at Zeppoz Casino in Pullman on the coaches talk show to discus the day’s news and answer other questions about the Cougars program.

Below, we break down five notable things that were covered during the initial radio show.

At no point during the Pac-12 media webinar that took place an hour earlier did Commissioner Larry Scott suggest the Big Ten’s decision to play a fall season influenced the Pac-12’s approach. The point simply wasn’t broached.

But during the radio show, Schulz hinted at the Big Ten applying pressure last week when it became the fourth Power Five football conference to announce it would plow forward with a season, of course leaving the Pac-12 as an odd man out.

“We have been working for about the last week with our colleague presidents from the other 11 Pac-12 schools about what would it take in terms of health and safety to get football going for the Pac-12,” Schulz told Chaznow. “I think once the Big Ten elected to play, we didn’t want to be the last league out there that wasn’t playing.”

One of three coaches who didn’t have an opportunity to observe his team in spring camp, Rolovich indicated he’ll be using a truncated, expedited timeline to make decisions on his depth chart.

“What I told them the other day was, ‘If we get going, I apologize, but we’re going to have to name starters at a point probably before we would be ready to,’ ” Rolovich said. “And you’ve got to understand, this is going to be an evolving season where you’ve got to keep getting better.”

No Pac-12 school finished spring camp before the NCAA shuttered spring sports in March, but nine of the 12 squeezed in one or more practices. The three that weren’t are also the only three under the leadership of a new head coach: WSU (Rolovich), Washington (Jimmy Lake) and Colorado (Karl Dorrell).

The rushed timeline will have depth chart ramifications, but Rolovich said it’ll also determine how deep the Cougars get into their offensive and defensive playbooks before they have to line up against someone wearing a different uniform.

For what seems like the umpteenth straight season, the top storyline during preseason camp will circle around the starting quarterback job, vacated by senior and national passing leader Anthony Gordon.

According to Rolovich, there are four quarterback on campus, with three in play for the starting role. Redshirt sophomore Cammon Cooper and redshirt freshman Gunner Cruz return to a position group that also welcomes in true freshman and highly touted prospect Jayden de Laura, as well as walk-on Victor Gabalis.

Rolovich made no mention of junior college transfer QB Will Heckman, who’s still listed on WSU’s spring roster, or Jake Constantine, the former Weber State quarterback who announced he’d be walking on during the summer.

Nonetheless, Cooper, Cruz and de Laura always seemed to be the three strongest candidates for the job.

WSU will blend two of the most impressive schemes/units from the 2019 Mountain West football season: Rolovich’s Hawaii offense and Jake Dickert’s Wyoming defense.

Speaking on behalf of the defense, Rolovich said Dickert’s unit has “a reputation I think defensively this region of the country will appreciate very much.”

“In talking to Jake, (AJ) Cooper and J-Rich (John Richardson) to come over, they were very consistently that way in the Mountain West. They were hard-nosed, they were smart, they played hard. There was not a lot of stupid penalties.”

Rolovich believes those attributes will play well for the Cougars, “especially in a shortened season.”

Unlike the system the Cougars ran under Tracy Claeys and Alex Grinch, Dickert’s defense relies on a 4-2-5 scheme, meaning WSU will have four down linemen playing a majority of the time.

“It seems to have been really smooth. When they go out and work, there’s not a lot of, ‘Hey, what do we do here?’ ” Rolovich said. “They’re all on the same page and I think that really shows the team, it builds their confidence up within the system.”

Rolovich took various fan questions midway through the show. Some football-related, some not as much.

Your thoughts on peanut butter and jelly sandwiches?

“I’m a huge fan, I’m actually big on toasting the bread before a peanut butter and jelly sandwich,” Rolovich said.

“I have to be honest, I haven’t really been focused on the helmet choices this year,” Rolovich said. “I love the color scheme. I don’t get involved with that too much. … I think Nike and just whoever’s designing the uniforms, I think it’s a real unique look whenever they see it.”

“I really liked playing at Fresno State,” Rolovich said. “Well, you know they’ve got that funny bulldog with the weird elbows on the bulldog. I used to make fun of them. We had some good jawing back and forth.”