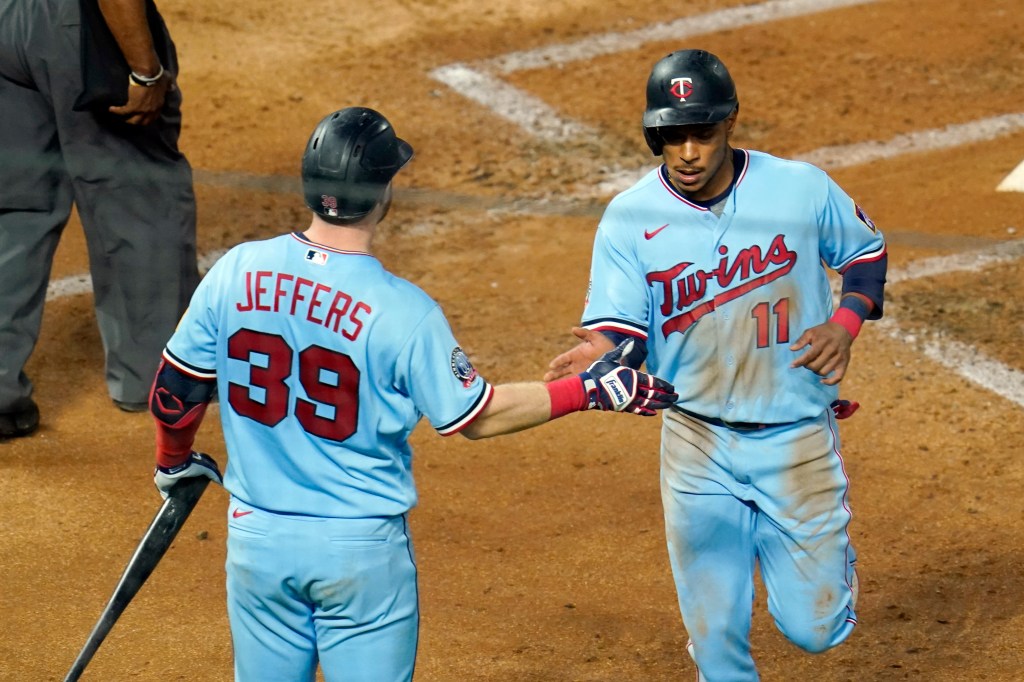 After scoring the winning run on Tuesday, Eddie Rosario acknowledged being jealous of teammates given the robe treatment, which was reserved for teammates who had homered in the Twins’ 5-4, 10-inning victory over the Detroit Tigers.

It didn’t take long for Rosario to get his own robe moment.

Rosario and Jake Cave each hit two-run home runs, and Kenta Maeda threw another quality start as the Twins finished a sweep of their two-game series against Detroit with a 7-6 victory Wednesday at Target Field and pulled back into first place in the American League Central.

Minnesota started the night a half-game behind the Chicago White Sox, who lost at Cleveland, 3-2. The Twins now own the No. 2 seed in the AL, and put another game between them and the New York Yankees, 14-1 losers to Toronto on Wednesday, in the race for home-field advantage in the first round of the playoffs should the Twins not win the division.

Miguel Cabrera supplied all the offense for the Tigers, driving in six runs with a pair of three-run home runs, the second with two out in the ninth, but it was a good night for the Twins.

Getting a rare night as the designated hitter, Rosario followed Josh Donaldson’s two-out walk in the fifth inning with a line drive off Tigers starter Casey Mize that landed in the visitor’s bullpen in left-center field for a 6-0 lead.

That was it for Mize (0-3), who was tagged for six earned runs on five hits and two walks.

Rosaro drew the other walk off Mize lead off the fourth inning and came home on Cave’s 417-foot homer onto the plaza behind the right field home run porch for a 4-0 lead.

In his first season since being acquired from the Los Angeles Dodgers, Maeda (6-1) has thrown eight quality starts in 11 appearances for the Twins and is set to pitch the opener in Game 1 of the Twins’ three-game, first-round playoff series on Tuesday. Miguel Cabrera ruined his shutout with a one-out, three-run home run in the top of the sixth, but Maeda fanned the next two batters to retain a 6-3 lead.

He finished with nine strikeouts. Sergio Romo gave up Cabrera’s second home run after relieving Caleb Thielbar but earned his fifth save by getting Jeimer Candelario to ground out to first.

Cave started the Twins’ half of the sixth with a solo home run for a 7-3 lead. It marked his third multi-homer game. The Tigers loaded the bases with one out off reliever Matt Wisler in the seventh, but Tyler Clippard came on and struck out leadoff hitter Victor Reyes and got Willi Castro to pop out to end the inning.

Marwin Gonzalez drove in Jorge Polanco for the Twins’ first run, and Byron Buxton plated another with a fielder’s choice grounder as the Twins took a 2-0 lead in the third inning.