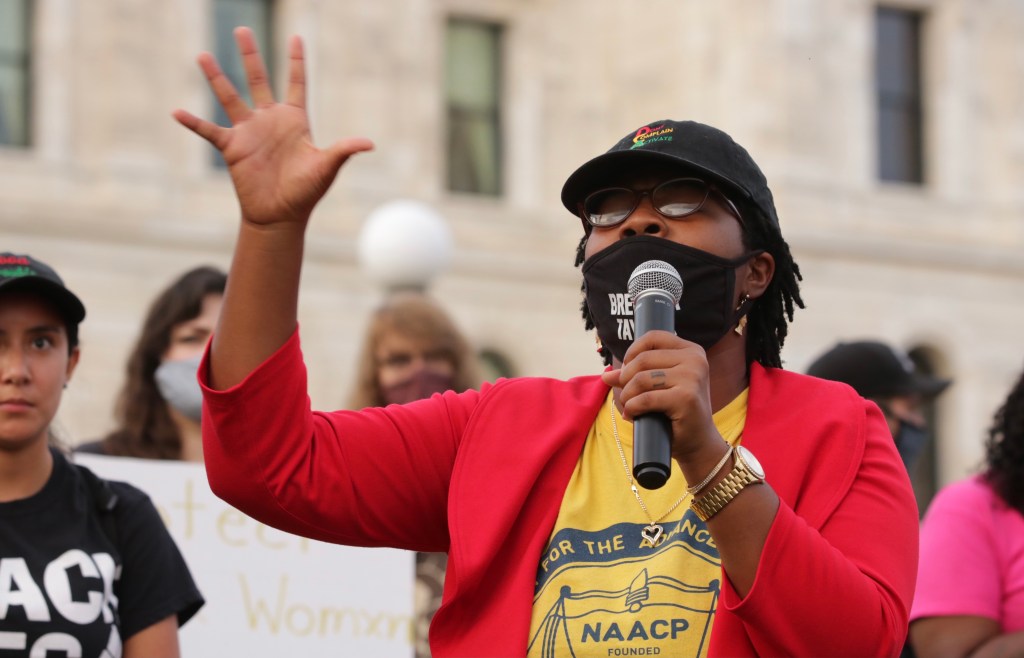 Taylor, an unarmed Black woman, was shot and killed in her apartment during a March drug raid after her boyfriend shot and wounded one of the officers, all of whom then returned fire. But the no-knock warrant used to search her home was connected to a suspect who did not live there, and no drugs were found inside.

One of the officers involved was charged Wednesday with wanton endangerment for shooting into neighboring units, but not for killing Taylor, a 26-year-old emergency medical technician.

Protesters who gathered at the Minnesota Capitol about 6 p.m. decried what they called as the criminal justice system’s failure to hold the officers accountable for Taylor’s death.

Leslie Redmond, president of the Minneapolis NAACP, called it “a troubling day.”

Redmond said she and 86 others who were arrested in July as they protested outside the Louisville home of Kentucky Attorney General Daniel Cameron received harsher treatment under the law than the officers who killed Taylor.

“I have a court date and the cops who killed Breonna Taylor don’t,” she said.

Michelle Gross, president of Minneapolis-based Communities United against Police Brutality, called for all police shootings to be investigated by independent prosecutors, rather than district attorneys who she said are too closely allied with law enforcement.

Following a roughly hourlong rally, the demonstrators began marching west along University Avenue, delaying some Green Line rail service, according to Metro Transit. By 8 p.m., the marchers appeared to be headed toward Interstate 94.

Taylor was among several Black Americans to die in recent months at the hands of police, galvanizing a wave of protests that swept across the United States this summer.

The death of George Floyd, who died in May after being pinned to the ground by the knee of Minneapolis police officer Derek Chauvin, sparked nearly a week of protests and riots in the Twin Cities and across the country.

The Wednesday rally in St. Paul was organized via social media by Black Lives Matter Minnesota, the Minnesota chapter of the Council on American-Islamic Relations and a handful of local racial justice organizations.