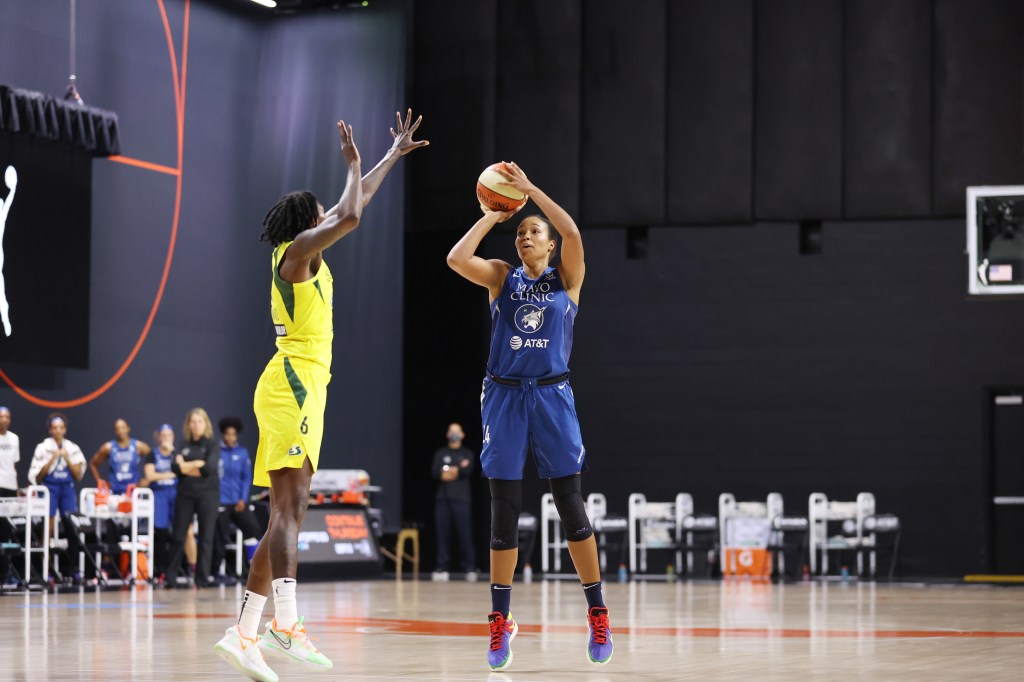 One of the problems for the Lynx this season when taking on the best teams in the WNBA like Las Vegas or Seattle was that Minnesota never had the best player on the floor, particularly not with Sylvia Fowles out.

That wasn’t the case in Game 1 of the WNBA semifinals Tuesday.

Facing a team that features Breanna Stewart, Jewell Loyd and Sue Bird, the Lynx’s Napheesa Collier stood head and shoulders above them all. The second-year forward put up 25 points, nine rebounds and six blocked shots — joining icon Lisa Leslie as the only players in WNBA playoff history to post such a stat line.

The Lynx nearly won Game 1, before falling 88-86 to the WNBA title favorites at the buzzer. Collier, the 2019 WNBA rookie of the year, was the main reason why.

Collier got it done in all aspects. She made 4 of 5 three-point attempts, while also taking advantage of post touches. On defense, she slowed Stewart, a former WNBA MVP.

“I thought Phee was incredible,” Reeve said. “It’s really important for us that Collier plays like she did, and tried to will us in there.”

Collier seems to know these types of efforts are required if Minnesota is going to contend with Seattle — a team that twice blitzed the Lynx in the regular season — in this best-of-5 series, which resumes at 6:30 p.m. Thursday. An aggressive, smart Collier is the Lynx’s path to success.

Minnesota was best known this season for its sheer number of players who could be Option A on any given night. Collier was great this season en route to earning second-team All-WNBA honors, but it wasn’t like she took games over on a daily basis. But there’s no time like the present to do so.

“We need it. You know what’s next, in Game 2, anything that you had success with is going to become even harder,” Reeve said. “That’s the fun of a series. Now you’ve got Game 1 in the books and we go back and study the video and see what each team can take away that they weren’t happy with. In order for Phee to be successful, she’s going to have to find even more ways to get it done, but she’s got such a will about her, such an agility about her.”

Collier’s ability to learn and adapt has been on display since she stepped into the league last year. At the start of this season, Collier felt the wrath of opposing defenses keying on the reigning rookie of the year for the first time and playing her to only be a threat in the lane. She started to hit enough outside shots and played well off fellow forward Damiris Dantas to combat defensive game plans.

Defensively, Reeve said Collier has bought into the ideas of positioning and staying vertical when going airborne. All six of her blocks werecrucial for Minnesota on Tuesday. Her defense of Stewart kept Seattle from creating separation.

“All of that was fueling us,” Reeve said. “That was pretty exciting for us.”

Collier said she was simply locked in on Stewart’s tendencies, noting she had extra time to study the game plan after Game 1 was postponed from the original Sunday start date.

“If she makes a hard shot, she’s a great player, she’s going to do that and it’ll happen,” Collier said of Stewart. “But take away the things that she always does and is really good at.”

Stewart will make adjustments ahead of Game 2, Collier noted. But she will, too. The chess match continues, and the Lynx have to be encouraged by their queen’s ascension.

“She’s just done some really impressive things,” Reeve said. “If she plays like (she did Tuesday), we have a chance.”