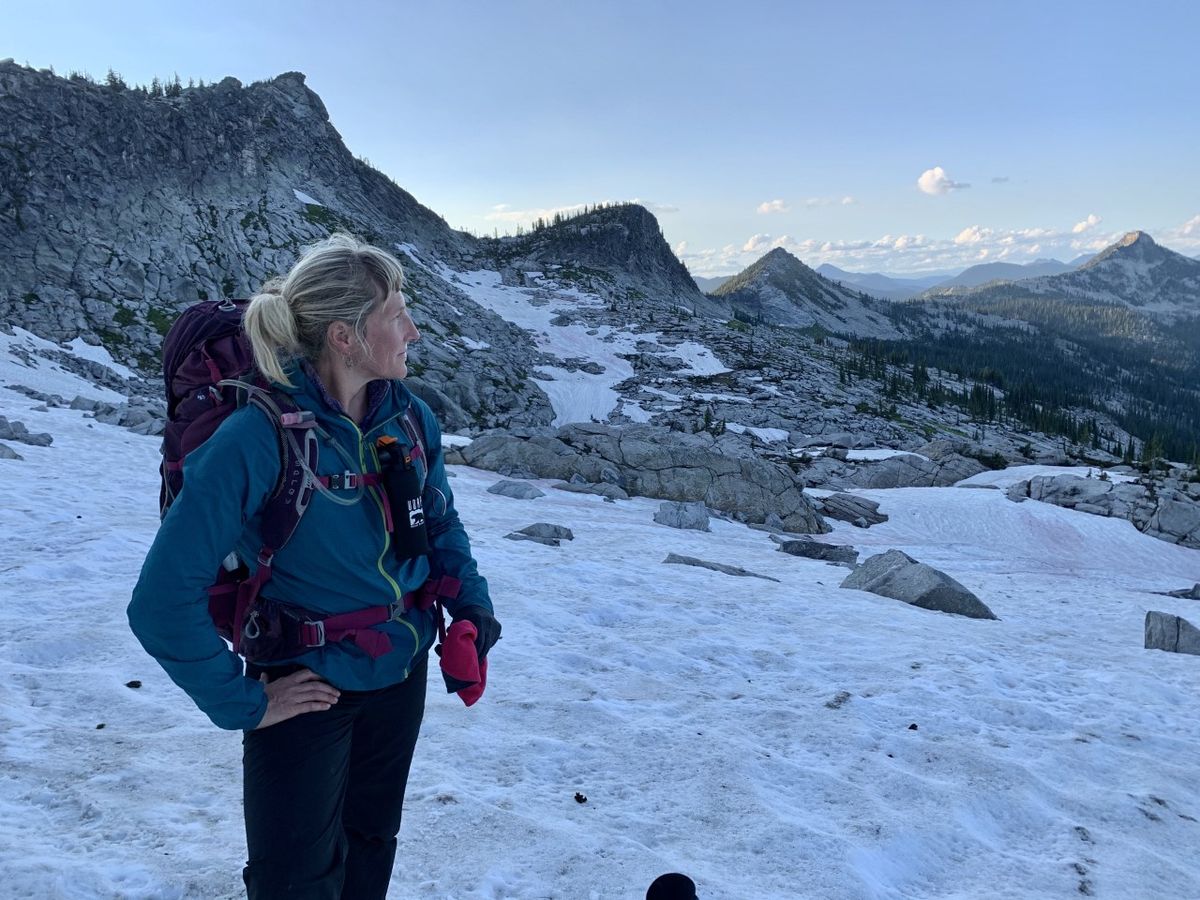 Every time I think I am about to embark on an epic new adventure into uncharted territory, my research lands me at the door of some local codger or outdoor enthusiast who says, “Great hike! I did that back in the spring of …” Typically, with equipment from their revolutionary ancestors or a pocket knife and some dried fruit.

I was standing in Mark Edmundson’s garage. It looked a lot like my garage – a mess of bikes, skis and backpacks. A dirty wooden climbing wall hung on one end. A small sauna had been built in the corner.

Mark could be 40 or 60 and worn by sun or hard work, but he has the childlike enthusiasm of a reckless dirtbagger. When he talks about views and trails, his eyes sparkle with daydream and unbridled excitement. He drops his old backpack on the concrete and unfolds it. It is made out of Dyneema – a material originally used to tether satellites, “So you know it’s strong and light,” he said. His camp stove is made from an old beer can. He starts his fires with grass and twigs so he doesn’t need to carry a fuel can.

Mark is describing a route that I am hoping to trace through the Selkirks, although from the opposite end. If I could catalogue his directions, I wouldn’t even need maps. He also has the undeniable ability to make the entire thing sound fun and easy, even when he talks about impassable fields of saplings.

“Just below the top of this ridge, you’ll see a wide animal track – it’s like a highway!” He points out peaks and creeks and ponds and problems that are unmarked on the several maps I’ve spread across the table. Other instructions included crossing a creek and looking for an “obvious big tree in a gap between the rocks.” Somehow that formation will stand out from all the other trees in gaps.

Among my data collection resources was Jim Mellen, whose boots have been laid on nearly every peak of the Selkirks and Cabinets. He also encouraged the adventure with an optimistic, “You’ll have so much fun up there.”

He generously provided GPS tracks I naively assumed were safe because septuagenarians aren’t supposed to scramble exposed Class 4 peaks with loaded backpacks. This was a critical error in my planning. I recall no tales of injury or exhaustion. It would seem backcountry hiking and childbirth have that same amnesiac effect on people.

The Selkirk Mountains begin to the south with the twin Mica Peaks – one in Idaho, one in Washington – and stretch north into Canada along the Purcell Trench, separating them from the mighty Rocky Mountains. Older than their neighboring peaks, the rock of the Selkirks was formed by a metamorphic process. Time, heat and pressure transform the rock into the quartz-packed granite for which the range is known. Aesthetic to the eye with its glimmering of color, it also has the quality of offering a solid grip as hikers walk up steep slabs of the light gray stone.

Our objective would be to hike into the Long Canyon trail, a nearly 20-mile path toward the ridge, and catch the ridge line just above Pyramid and Ball Lakes where the trail ends.

For a long time, I’ve wondered if I could pack from the northern-most access (just shy of the Canadian border) straight down the range to my back door, which sits south of Schweitzer and north of the Pend Oreille River. Mostly, these efforts have ended with a “failing better” result, including a number of flesh wounds, a few lost toenails and at least one ex-boyfriend.

I recruited my friend and fellow mountain-lover, Shannon Barnes, with some (perhaps misleading) promises of those animal highways, a selection of organically cured meats and plenty of opt-out routes.

Pro-tip: Taking another female backcountry eliminates the necessity for bear spray. Not surprisingly, we saw no wildlife, though I did pull my bear spray once and threaten some menacing bushes.

While our first day was a relentless schlepp upward, we found ourselves grateful to be in the shaded old growth of Long Canyon on a hot day. The mosquitoes threatened to induce madness, but once we gained just a bit of elevation, they disappeared as we wound between the cathedral of hemlocks and waded through the freshwater creeks.

There is something ancient, even primal, to crossing large swaths of land on foot. To move with everything we need in a simplified version of life is to gain a new perspective. The incessant pummeling of society, news, social media, PTA meetings, traffic and text messages all just dwindle away, and with every mile, they lose importance. With all that free real estate, what begins to fill our minds are the fairy-tale mountain springs winding slowly through alpine grass fields, the fresh air that we breathe deeply, our footing on rocks, where our bed for the night might be made.

The freedom that comes with leaving the trail is also a liberation. It is to be given limitless directional potential in the mountains, to be the master of one’s own fate. One can go over, around or through in all manners, although experience would suggest that the most-difficult-manner and least-direct-route are unintentional qualities inherent of my hiking repertoire. The trick is to always sound confident about it.

“Yeah, this section is probably going to be a little exposed and sketchy,” I’d say as I traced my finger along a map – probably not even the map we were on.

During those days, we solved most problems of the world, dove deep into our childhood issues, celebrated gratitude for the lives we were gifted, and planned our next snacks with hungry delight. Most of all though, we supported each other in a kind of mutual admiration campaign of good faith and wondered why we’d ever return to the real world anyway.

The Selkirk Range and the landscapes that surround and create those picturesque summits are some of the most rugged and precarious terrain I have traveled. Talus field after talus field, we picked our way across tippy granite scree slopes and overexposed ridges, clinging to trees and grass and rock on our way down the other side. Our shins were bruised and scratched, our hands and arms bled, our feet blistered – and our grins were wide.

Each morning we woke to peer out at our next objective on the skyline, aiming often for the distant landmark of Chimney Rock. We ignored our creaking knees as we clambered our way across the narrow ridge toward it one afternoon. We were both low on water. The cliff to either side of us dropped away in a sheer plummet. I was tired and thirsty and maybe even forgot I was having a good time.

That morning we had already scrambled up exposed rock peak and declared Mellen crazy for making it sound easy. Our adrenals were coughing up dust from the last awkward clambering up lichen-covered cliffs. The distant sea of boulders looked almost comforting in comparison. I crawled down a scratchy black cube of mountain behind my dog. She stopped and whined, peering over the edge of a new cliff.

“How does it look?” Shannon asked.

“Like we’re not going this way,” I said, turning dejectedly on my heels.

I sometimes feel sorry for myself when I am forced to spend more time in the mountains because I am lost or cliffed-out, as if I have forgotten why I came there in the first place. I silently retraced our precarious route for an hour before we descended off the ridge into another bushwhack through bear country and to the basin of Chimney Rock.

The slab slopes that greeted us later made reparations and our moods improved as we found trickles, then babbles, then rushes of fresh mountain water. The sun was setting and we would make as much progress as we could in the daylight hours.

We met another hiker beneath the peak of Mount Roothaan. Like kindred spirits and tired travelers, we exchange stories of the storm that had come through, the snow fields we crossed, water sources we’d found. We made our way through more bear grass and a new swarm of vicious mosquitoes, toward the distant, barren apex of Gunsight. The next day, we would pass Fault Lake, where my husband and friends would be waiting with bags of new food.

Just as light began to fail, we came to another cliff and dropped our hands to our waists in defeat. We were too tired to figure out how to navigate it and the mosquitoes were unbearable. To our right, the mountains rolled away to the purple hues of Priest Lake. Shannon was wandering around in circles aimlessly in the dusk, batting at bugs. Even my dog had an expression of silent resentment.

“You better get in the tent,” I said as I dug around for paracord to hang our bear bag. “I’ll hand you things we need.”

Shannon folded herself inside and played homemaker. It was our fourth day of a ceaseless forward push. Our bags somehow seemed heavier. Our joints older. One or both of us might have asked whose idea this was anyway, as I drained blisters on my dirty feet.

Lying in the dark of the tent, the mosquitoes hummed a ferocious threat. I don’t know who said it first. Maybe it began with a revelation that neither of us had any clean socks left, or that coffee was low, but the comforts of home suddenly sounded undeniably sexy.

“We could just hike out with everyone tomorrow,” I said.

By the time the thought had crossed my mind, the pros list was exponentially longer than the cons list. We had conquered an incredible amount of distance through unforgiving terrain. We celebrated our toughness, our pace, our backcountry prowess, our grace in the face of aging, and declared ourselves unparalleled both in sense of adventure and appetite of cookie. Then we fell asleep giddy at the prospect of only eight hours of hiking the next day.

Less than a week later, a stranger reached out to me for some information on the route, which meant I immediately declared him a friend and a categorically good human. Jason Keen and his friends, Chris and Tyler, had hatched a similar scheme (apparently over beers and a romantic view from Priest Lake) to traverse that same skyline.

I shared the list of discard-as-you-like advice on tree landmarks, which side of the mountain to scale, and caution about the sheer immenseness of the feat. I left out the part about my scars and the diet of Advil I’d been on. Those are neither the reasons for nor the deterrents to our journey. They are not what we remember. We remember the freedom and reprieve.

It is why we eagerly pass on the torch, the maps, the beta, the guidance to each other. And we do it with the same enthusiasm in which we received it, because we understand:

We are not out there to conquer anything. We go to keep ourselves from being conquered.

Ed. – Jason, Chris and Tyler succeeded, summiting a dozen peaks and scaling their way from Pyramid Lake all the way to Schweitzer in a remarkable 77 hours.