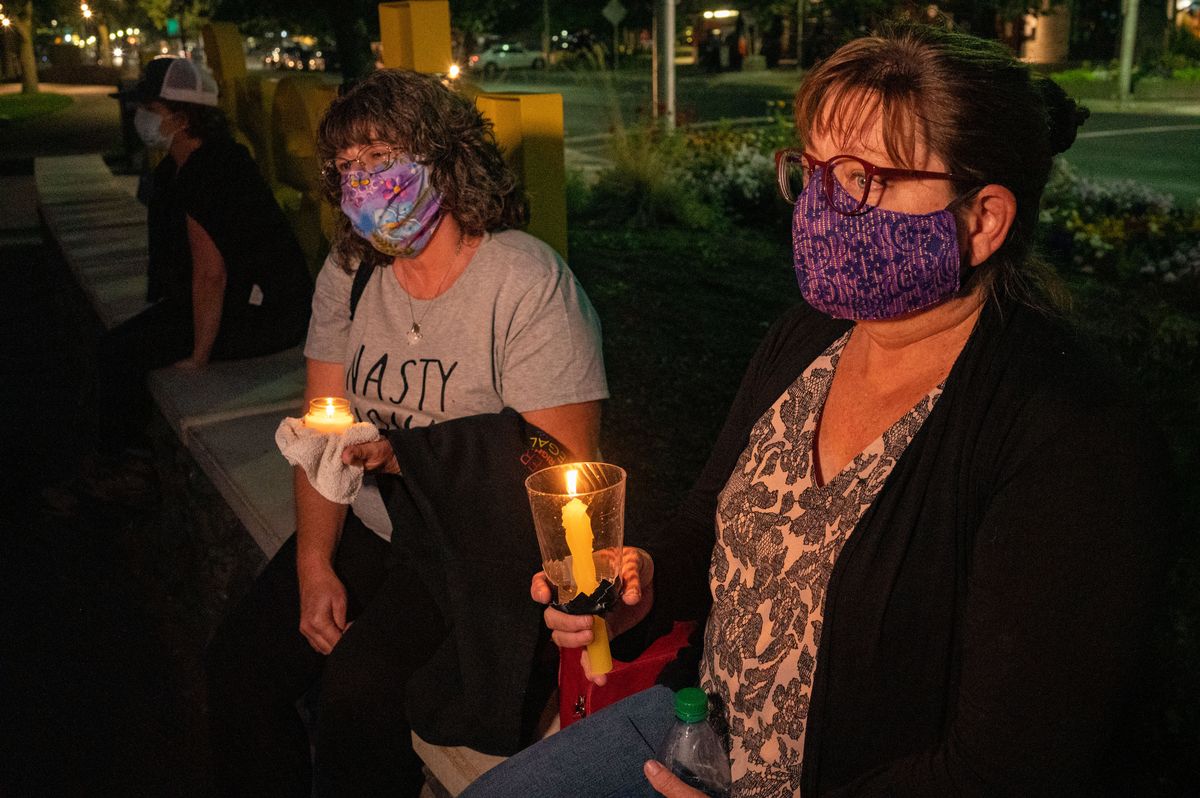 As soon as Renee White heard the news that the police who shot and killed Breonna Taylor were not charged with her death Wednesday, she got in the car and headed for Louisville.

“Hands down, I have to be there,” White, who emerged as a leader of Black Lives Matter protests in Spokane this summer, said as she drove through Ohio. “I want to see all the people who are in solidarity with Breonna’s family. Something told me I needed to be there.”

Despite nationwide protests demanding the police who shot Taylor be charged with murder, Wednesday one former police officer was indicted on first-degree wanton endangerment charges for posing a risk to neighboring units when he shot into Taylor’s apartment. Two other officers who fired shots were not charged, meaning no officer has been charged directly with Taylor’s death.

White lived in Spokane for 11 years. After protests broke out this year, she said she felt called to return to her hometown of Detroit to “mobilize” to get justice for her brother, who was murdered in 2007.

Her 17-year-old brother, Sherif White, was killed after being shot nine times in Detroit. It has remained a cold case for 13 years. She said his murder didn’t even make the news. She believes racism prevented justice for her brother.

“It was just like, ‘OK, someone got killed. Another family who lives in the hood. Oh well,’” White said.

White said she sees that same disregard for her brother’s life when it comes to Taylor’s. That’s why she got in the car and started the five-and-a-half hour drive, she said.

Taylor, a 26-year-old Black EMT and aspiring nurse, died in her home after Louisville police officers shot her March 13. Police broke down the door to her apartment while executing a late-night no-knock warrant in a narcotics investigation.

“Charging for the endangerment of others seems weak at best,” said Spokane attorney Jeffry Finer, who represented Otto Zehm and his family after Spokane police killed Zehm, who was developmentally disabled, in 2006.

Without knowing Kentucky law well, Finer said he couldn’t be sure why two police weren’t charged and one received seemingly light charges. But in Washington, he said, it would have been very difficult to have the officers charged criminally.

For many, the decision in Kentucky feels like an injustice next door, said Rev. Walter Kendricks, a Black leader in Spokane.

“It matters because, to quote Dr. King, ‘Injustice anywhere is a threat to justice everywhere.’ That’s why it matters,” he said.

Wednesday around 7 p.m., a group of two dozen protesters of all ages gathered at Riverfront Park’s Rotary Fountain. Some held signs, while two older women carried lit candles. The group marched a loop through park just as rain began to fall.

Kentucky’s Attorney General Daniel Cameron said Wednesday the officers were “justified in their use of force” because Taylor’s boyfriend fired first.

To Kendricks, that explanation is flimsy.

“A local police department decided to break into a house and people have a right to carry arms. People really emphasize that here in Spokane,” Kendricks said. “If somebody broke through my front door, I’d shoot too.”

Kurtis Robinson, president of the Spokane chapter of the NAACP, said the decision has already made ripples across the country and in Spokane. The NAACP denounced the decision Wednesday, saying in a statement the justice system failed Breonna Taylor “and, as such, failed us.”

The jury’s decision, he said, seems intended to, “Facilitate disillusion. But what it really does with most of us is, we feel galvanized. We survived this for over 400 years. Do you really think we’re going to give up now?”

Finer said there’s still a possibility of the involved Louisville police officers being charged criminally. Federal grand juries operate with great secrecy, he said. In the Zehm case, Finer said he went two-and-a-half years thinking “the state and the feds had washed their hands on it,” but then learned a federal grand jury had been secretly conducting a trial.

In Taylor’s case, “there’s a federal angle and the feds could take it,’ Finer said. “There could be a grand jury being called federally now and we wouldn’t necessarily know about it.”

How protests could impact jury decisions is complicated, Finer said. It could actually backfire if a jury sitting on the case feels protests formed the charges, then they discount the evidence, he said.

But, in Finer’s eyes, the public expression is worth it in its own right.

”Those that need the most accountability get the least, and meanwhile communities of color continue to be harmed in some of the most egregious ways,” Robinson said.