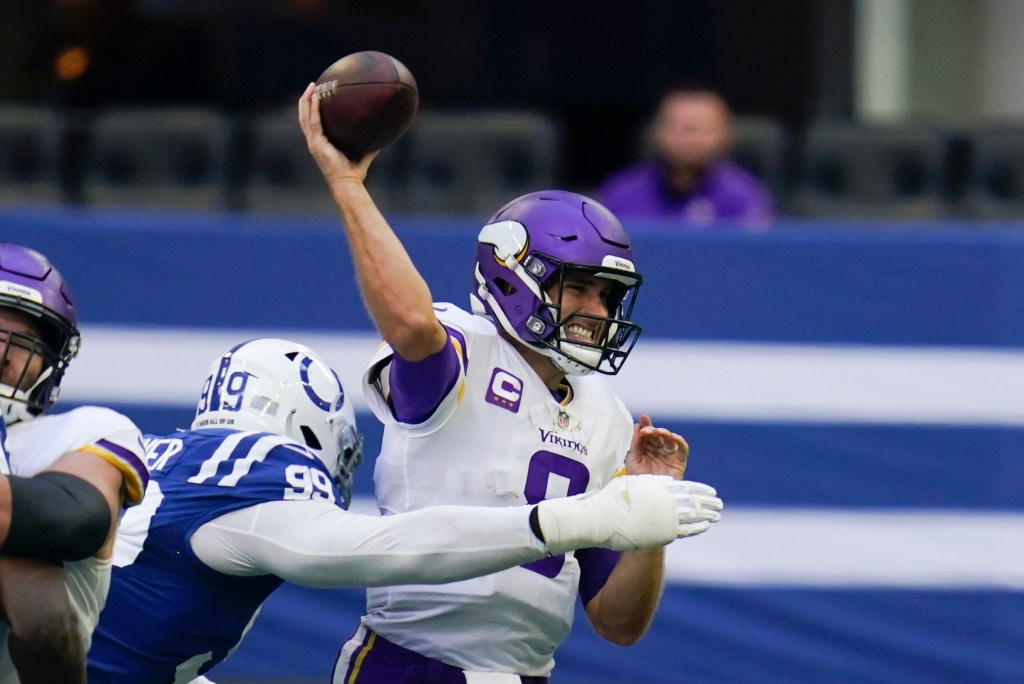 Kirk Cousins has bounced back before with the Vikings. And that’s what he’ll try to do again.

The quarterback had rugged early outings last September in games at Green Bay and Chicago before coming back to produce some of his best performances on his way to winning NFC Offensive Player of the Month honors for October.

Now, Cousins is coming off a career-low passer rating of 15.9 in last Sunday’s 28-11 loss at Indianapolis. So what does he need to do to turn things around this Sunday for the Vikings (0-2) against Tennessee (2-0) at U.S. Bank Stadium?

“I’ve kind of just built habits for myself over the years that I’ve found worked for me, and they’re the same habits you had last week before a tough game, but they’re the same habits you have when you have good games,” Cousins said Wednesday. “So, you just go back to your process and take it one day at a time and believe that over the long haul good things will happen.”

Cousins completed just 11 of 26 passes for 113 yards against the Colts, and threw three interceptions for the first time in his three seasons with the Vikings.

It would help Cousins if more receivers stepped up against the Titans. The Colts put much of their focus on two-time Pro Bowl receiver Adam Thielen last week, and he managed just three catches for 31 yards.

The only other wide receiver with more than one catch in the game was rookie Justin Jefferson, who had three for 44 yards. But the first came when the Vikings were down 15-3 and the next two when they trailed 28-3.

Running back Dalvin Cook had just two catches in the game for eight yards, and their three tight ends combined for just one reception for three yards.

Before he was traded to Buffalo in March, receiver Stefon Diggs was on the field for the Vikings keeping defenses honest. When asked Wednesday what the Vikings need to do now to take pressure off Thielen, head coach Mike Zimmer simply said, “We’ve just got to run our offense.”

Jefferson seems ready to become a bigger part of the offense. Taken with the No. 22 overall pick in April’s draft, he remains a backup on the depth chart behind No. 2 receiver Bisi Johnson, but he had the better game in Indianapolis. Targeted three times against the Colts, Johnson had one catch for 24 yards.

“Anything to help this team,” Jefferson said. “I’m here to make those big plays and bring a lot of excitement to this organization. We just have to do a lot more different stuff to get the ball in different people’s hands, and let the playmakers work.”

Cousins shrugged off the notion that other receivers must step up to take some pressure off Thielen.

Cousins offered few specifics on what he believes the Vikings must do to improve on offense. They’re 30th in the NFL in total offense, and would be even worse had they had not scored 24 fourth-quarter points in a 43-34 loss to Green Bay in the Sept. 13 opener, a game that had been all but decided by the third quarter.

If not, Cousins might see his 44-44-2 career record as a starter drop into losing territory. He admitted before last season that he was “pretty much a .500 quarterback in my career,” but did manage to lift his career mark to two games over .500 by the end of last season.