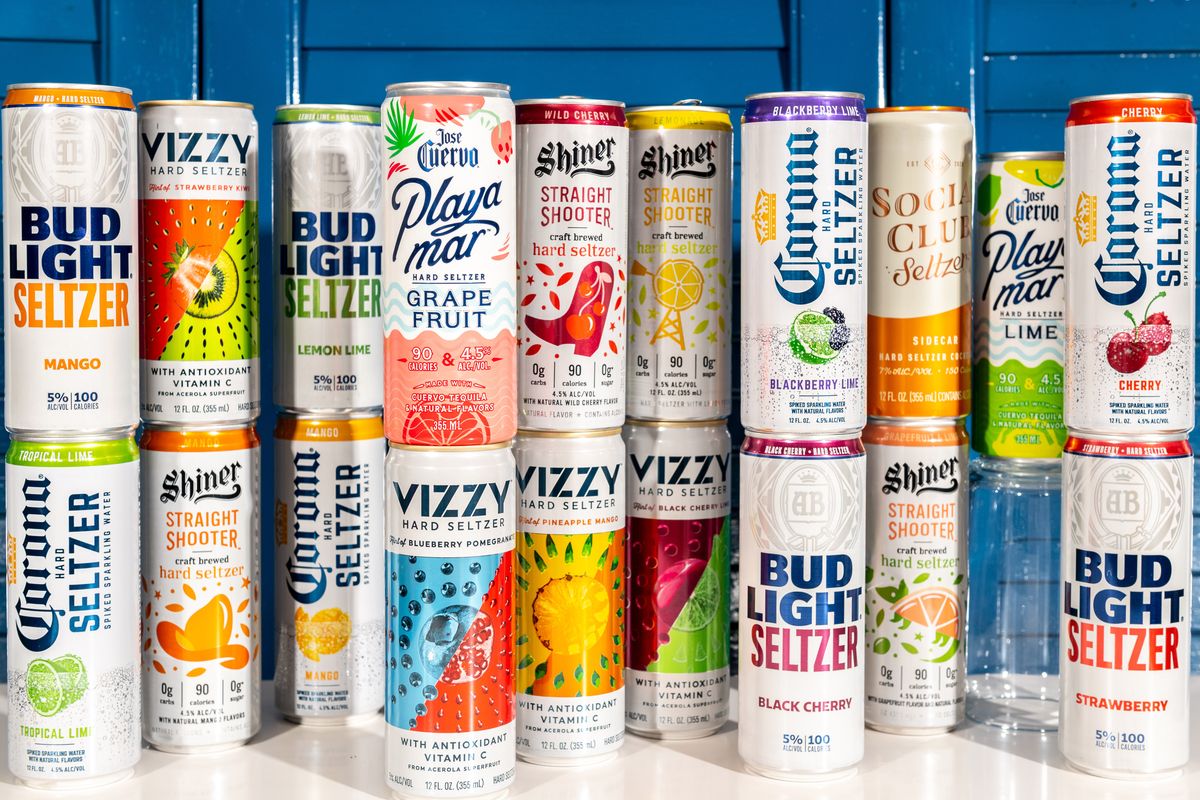 Hard seltzer was the defining drink of the summer of 2019. Demand for the bubbly, low-calorie quaff is showing no signs of going flat, and 2020 has seen a flood of new brands hoping to get in on the party.

The category is still dominated by White Claw and Truly: According to Nielsen, the two early arrivals represent 75% of the market share. But the massive and continuing growth in hard seltzer’s popularity (sales were up 127% over last year, Nielsen reported in June) means that nearly every big beverage company now has a seltzer.

A ton of products hit shelves this year, including seltzers from some of the biggest and most recognizable brands. So we rounded up a batch to see what’s new in the world of fizz.

And before we even cracked open a can, one thing was obvious: The new kids on the block aren’t attempting to visually distinguish themselves from their elders – like their forebears, they all come in tall, slender white cans, hinting at their low-calorie, low-sugar contents.

But it’s what’s inside that counts, right? Here it’s clear we’re in a new era. As a group, they are far sweeter and more intensely flavored than White Claw and Truly, though all boasted less than a gram of sugar.

This seems fitting – after all, who expected subtlety out of 2020?

These descendants of beer royalty were the best of the bunch – that is to say, they were the least offensive. I liked the light texture of these sippers, which didn’t coat my throat with the kind of cough syrupy slime that some of the others did. And the flavors were relatively subtle, which is like saying that Kourtney is the most demure of all the Kardashians.

Bear in mind that what I took to be a virtue might seem to others as a mark against them: A neighbor to whom I tossed a can complained it was watery and lacked punch.

This product from Molson Coors scored points for having relatively natural-tasting flavors, and I liked its effervescence.

Cracking open these cans from the beer maker beloved by nearly every Lone Star State native, I thought I detected a bready, slightly beer-like note. Don’t get me wrong – it was a welcome change of pace from can after can of cloying fruit bombs.

But the flavors were uneven: The wild cherry wasn’t too aggressive, while the grapefruit-lime was practically a punch to the face.

This proved to be the loser of the bunch with an overwhelmingly tinny flavor marring each sip. It left me longing for their more classic older sibling: a bottle of golden lager with a fat lime wedge. At least with that sipper, I’d be getting some real fruit.

At first look, this cocktail-aping line from Anheuser-Busch had the most appeal. Its can departed from the cookie-cutter formula with a classy brass-toned lid and slick logo that wouldn’t look out of place as signage on a cool speakeasy.

But the Sidecar version (the only one I could find) tasted nothing like its namesake. That might be because the seltzer doesn’t actually contain traditional booze – the alcohol in most seltzers comes from fermented sugar, which is basically malt liquor’s big glow-up. So instead of the deep cognac burn, I got candy-like flavors and an overwhelming sweetness.

This new entry from the company that’s practically synonymous with margaritas was different from the others: Its booze base is flavorful tequila, not a neutral malted sugar. I liked that more straightforward approach (I actually enjoy the taste of tequila!), particularly in the grapefruit variety, which had a cleaner flavor and a Paloma-esque vibe.