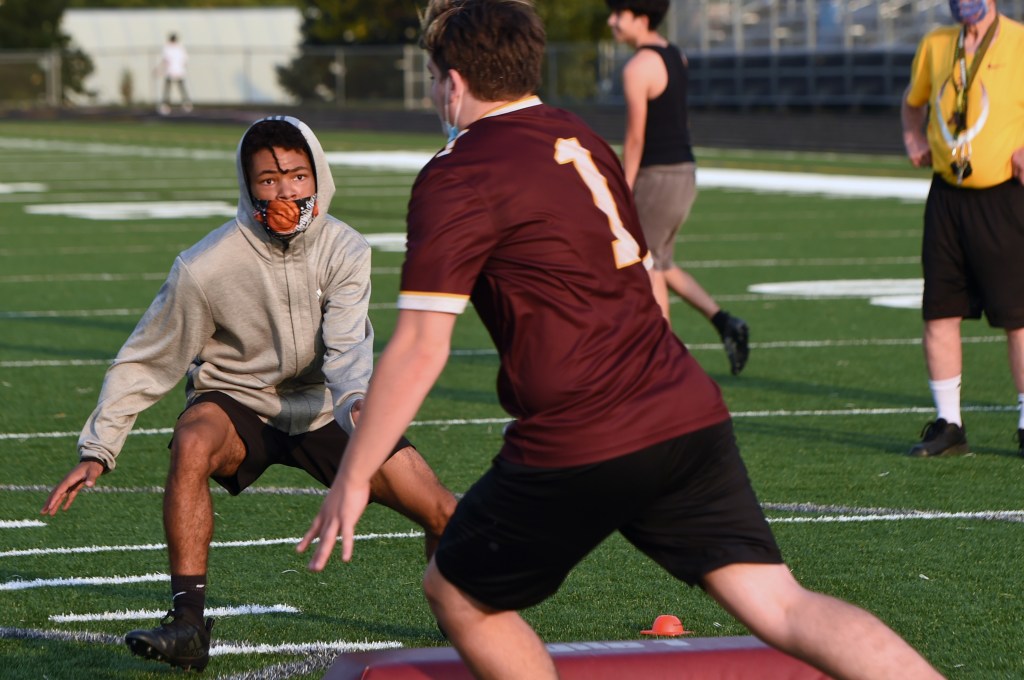 Central football coach Scott Howell was following the happenings of Monday’s Minnesota State High School League board of directors meeting from away, waiting for the news he could feel was coming.

First, volleyball was approved to be moved back to the fall season. Then, it was football’s turn, and his sport received the same fate. It was time to get back on the gridiron. He immediately emailed his players: “Get ready. It’s on. Let’s go.”

Central was on the field at 5:45 p.m. at the high school Monday for a pre-approved training session, just hours after the MSHSL’s decision, and a week before it will officially start its season with a first practice next Monday. The Minutemen’s first game is less than three weeks ago.

“I know it’s happening. Can I believe it’s happening? No,” Howell joked. “We’ll do our best to get ready. These guys are excited to learn. … We’ll be OK.”

There was a different feel in the air at Woodbury on Monday night. The Royals were under the lights, preparing for an actual season. They’d held previous fall training sessions, but this one had purpose.

Woodbury coach Andy Hill remembers the empty feeling he felt back in August, when he followed along with the original board decision to move football to the spring. At first, he thought no fall season meant no football. That was a low point.

“That’s when my heart sank a little bit,” Hill said. “This is kind of like the opposite of that. This is a rejuvenation, a rebirth in the energy of kids playing football this fall.”

It is not perfect. Central player Max Mills noted how much less time teams have before the season to get in shape, get to know one another and get ready to play.

“Now that we only have two weeks, it almost feels forced,” Mills said. “If we just played in the spring, we would’ve had that extra time that we missed this fall.”

Still, he and his teammates vow to not waste a second of the time they do have.

Woodbury senior Jack Bungarden felt a range of emotions Monday. West said all the players were constantly on Twitter, refreshing their feeds every three seconds. Updates were immediately sent to the players’ group chat.

“First I was like super happy, and couldn’t wait to get back on the field,” Bungarden said. “Then they said no state playoffs, and that’s kind of what you work for every year, so I was super happy and a little bit of disappointment at the same time. But mostly happy just to play games again.”

Hill thinks he might have a fix for the playoff situation, at least in Class 6A. There are two weeks allotted for playoffs. The big schools feature four districts. Perhaps all four district champions could advance to a Final Four of sorts? That will be figured out in time. As for the shorter prep period, Hill said it will be “a blast,” noting it’s better than preparing kids to sit inside for six months.

“You kind of got that little kid feeling inside where you’re all giddy,” he said, “and then you’ve got that adult side, which is like, ‘OK, we’ve got a lot of stuff to take care of quickly.’”

Monday night was a beautiful evening to be out on a field. Howell is happy his kids get that again.

“This is that regular feeling. … I just hope we have a season. Even though it’s going to be late, we’ll make the best out of it,” Central’s Jahiem Omeally said. “We’ll have that regular Friday night feeling. That’s what I’m missing.”

At the end of Monday’s training session, Hill spoke to his players, then asked his assistant coaches if they had anything to add. One did, raising his arms in the air and shouting, “It’s football time, baby!”