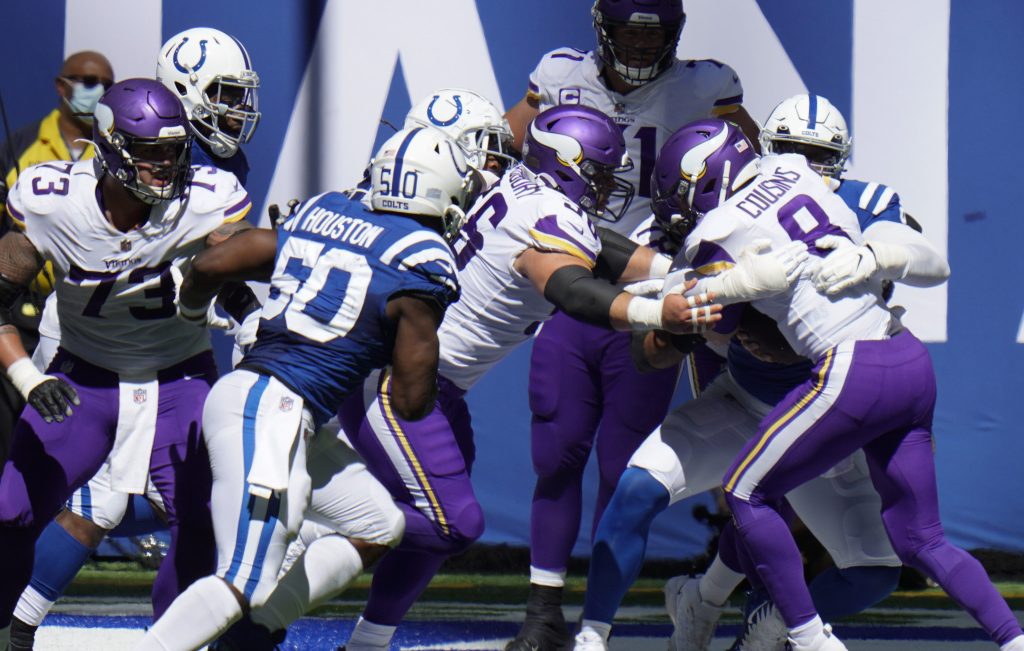 The Vikings entered the season with lots of questions about their young defense and not so many about their experienced offense. So what’s happened during the first two weeks?

The offense has been just as bad as the defense.

Entering Monday, the Vikings (0-2) rank No. 29 in the NFL in both total offense and total defense. In Sunday’s ugly 28-11 loss at Indianapolis, the offense mustered just 175 yards.

Head coach Mike Zimmer said after the game he was “concerned” since the Vikings “have a pretty veteran offensive group.” Receiver Adam Thielen echoed that on Monday.

“That’s probably the reason why it’s so frustrating,” Thielen said. “We have so many guys that have experience that are really good football players. … We have a lot of playmakers on the offensive side of the ball and we have a quarterback that has proven he can play at a high level in this league.”

Quarterback Kirk Cousins had the worst game of his nine-year NFL career against the Colts, completing just 11 of 26 passes for 113 yards, three interceptions and a career-low passer rating of 15.9. Thielen had just three catches for 31 yards.

The offensive line struggled, and Cousins was sacked three times, including once for a safety. The Vikings rushed for just 80 yards, including 63 by Dalvin Cook, who only got 14 carries.

“Is it frustrating?” Thielen said about the offense. “Yes, 100 percent, when you have a veteran group and have a lot of leaders on the offensive side of the ball and a lot of guys you look to that can make plays. So, I think that’s probably the good thing moving forward (is), ‘Hey, we have the pieces. Now let’s go do it.’ It’s easy to say, ‘We’ve got to fix this or that,’ but you’ve got to go out there and prove it.”

Until they can try to prove it Sunday against Tennessee at U.S. Bank Stadium, the Vikings will talk about it. Four of the team’s six team captains are on offense: Cousins, Cook, tight end Kyle Rudolph and tackle Riley Reiff.

“I’ll sit down and talk with all of them (Tuesday) and we’ll kind of get their feelings on where things are and where we’ve got to go from here,” Zimmer said.

Zimmer stressed Monday that he’s just as concerned about the defense as the offense. But at least the defense showed some signs of improvement after after giving up 522 yards in a 43-34 home loss to Green Bay in the Sept. 13 opener. The Colts had 354 total yards.

The offense took a step back after Week 1. Even though they were far behind against the Packers, the Vikings at least put up 24 points in the fourth quarter.

“The biggest thing is we’ve got to get back to being who we are as a football team,” Zimmer said. “Not so much just offense or defense, but we’ve made too many mistakes. …If you go back and look at the times we’ve been here (since 2014), the identity of our team has always been tough and physical and smart and not beating ourselves. So, we’re going to have to fix that.”

With Zimmer looking back at history, at least there is a track record of Cousins bouncing back. He had rugged outings last September at Green Bay and at Chicago but came back to be named NFC Offensive Player of the Month for October.

“Kirk’s a veteran guy that has had a lot of success in the league,” Zimmer said. “So, we expect him to come back and play better this week.”

Offensive coordinator Gary Kubiak will spend this week trying to get Minnesota’s attack back on track.

“We’ve got to find a way to stay on the field, get some stops, get the ball moving with some type of consistency as a group,” Kubiak told KFAN-FM on Monday. “So, obviously struggling. Very disappointed. … I just wake up (Monday) morning looking at myself. I’m the one that has got to get it figured out.”

In the opener, Minnesota ran just 49 plays to 76 for Green Bay. It remained lopsided on Sunday, with the Vikings running 47 plays to 67 for Indianapolis.

“The first thing is that we have to be able to stay on the field,” Thielen said.

That could be helped by more receivers stepping up. Rookie Justin Jefferson caught three passes for 44 yards Sunday, but no other Vikings receiver or tight end had more than one reception.

With the Vikings having traded Stefon Diggs last March to Buffalo, teams are paying a lot more attention to Thielen.

“That’s the situation you have, and you have to figure it out,’’ Thielen said.

Thielen said that’s the case with the entire offense.

“Just do whatever it takes to get our mojo back,’’ he said.