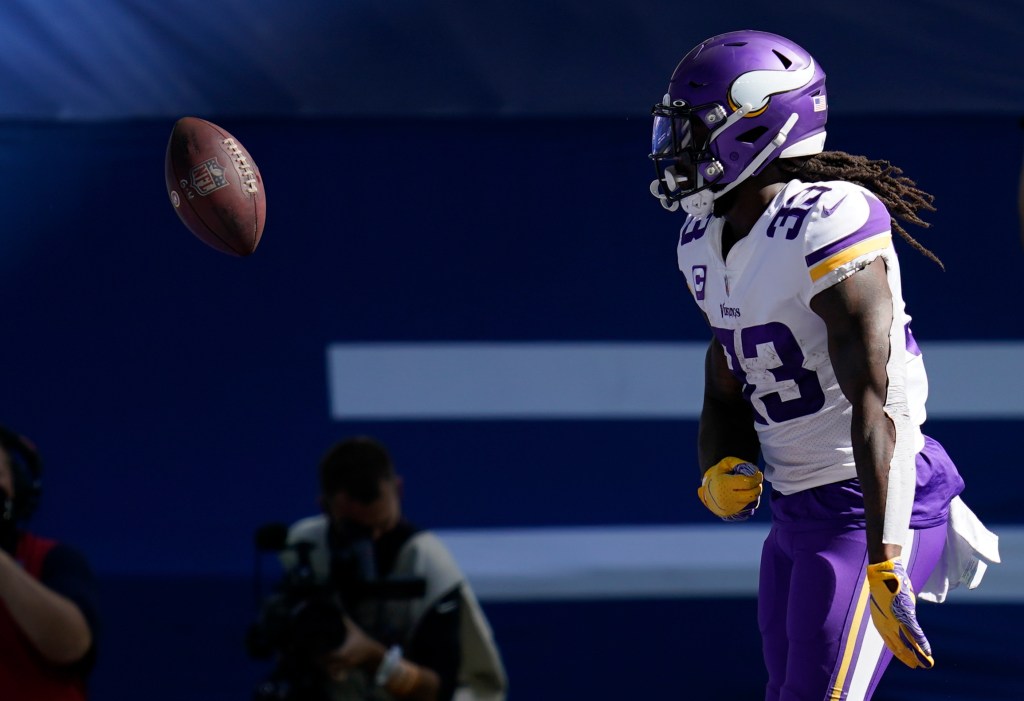 After two games, the Vikings lead the league in garbage points.

They have shown a knack for making the final score a bit more respectable after falling way behind to the Packers in last week’s season opener and then again against the Indianapolis Colts on Sunday. When the game mattered, the Vikings had just three points in their 28-11 loss in Indianapolis.

What they do late in games doesn’t begin to rinse away the issues and problems that surface earlier in the game.

One area that needs to get better fast is the use of Dalvin Cook.

Cook doesn’t have stone hands like Adrian Peterson. He is one of the NFL’s best all-around backs. We didn’t seen it, though, when teams often establish their identity in a game. No passes were thrown to him in the first half Sunday. He had two catches for eight yards in the second half to give him three receptions in two games.

Cousins continues to have tunnel vision for Adam Thielen. It’s so bad he threw deep into double coverage in the first half, with the outcome being one of his three interceptions. Cousins continues to flip flop between being mediocre and miserable when he needs to be stellar.

And while we’re piling on, Cousins has lousy pocket awareness in the end zone, and has been caught for safeties in both of the first two games.

“He didn’t play very good,” Zimmer said, who showed great restraint not using any of the saucier words or terms Vikings fans have gone with to describe Cousins, who had the worst passer rating of his career Sunday.

“Today was not a sharp day,” Cousins said in a record-setting understatement. “Watch the tape. Correct mistakes.”

Cousins fell back on the watch-the-tape line several times in postgame interviews. He could watch just about any tape of a game he’s played in and see many of the same screwups.

Then there’s wide receiver Bisi Johnson. He had a pass ricochet off his hands for an interception early in the second half. He also had a costly penalty. Vikings coaches need to get over this odd fascination with Johnson.

Johnson needs to be replaced in the starting lineup by rookie Justin Jefferson. Of course, it won’t matter which of them starts if Cousins stays laser focused on Thielen.

Kubiak called just six running plays for Cook in the first half — five in the opening drive. Kubiak had Alexander Mattison on the field much too often in subsequent first-half drives.

Kubiak has not distinguished himself in these first two games. He knows football. Collected a Super Bowl ring as head coach of the Denver Broncos. Yet he coached Sunday’s first half as if he’s overseeing a running back-by-committee offense. Cook is the star and Mattison’s role should be to give Cook an occasional breather.

The offensive line isn’t good. We all know that. It hasn’t been good for several seasons. That’s on Zimmer and general manager Rick Spielman.

As for the defense, that’s Zimmer’s baby. And sticking with that theme, his cornerbacks still are are in the toddler stage. Colts quarterback Philip Rivers likely would have been scalding the youngsters all day if he wasn’t finding so much success throwing to tight end Mo Alie-Cox.

With Danielle Hunter injured, the strength of the Vikings’ defense should be the linebackers and safeties. They didn’t exactly excel trying to cover Alie-Cox. It didn’t help that linebacker Anthony Barr was out for most of the game with an injury.

The front four, of course, would be much better with Hunter. He’s on injured reserve for at least another week. Without him, perhaps Zimmer, defensive guru that he is, should be calling more blitzes. Then again, he likely isn’t out of fear his young corners will be scorched.

“The identity of this team is not what it has been for the last six years,” Zimmer said.

The identity of this team, at the moment, is reminiscent of the Vikings’ 1984 team that went 3-13 during the Les Steckel Error. As Zimmer said, his team needs to get better and not just fast — warp-speed fast.