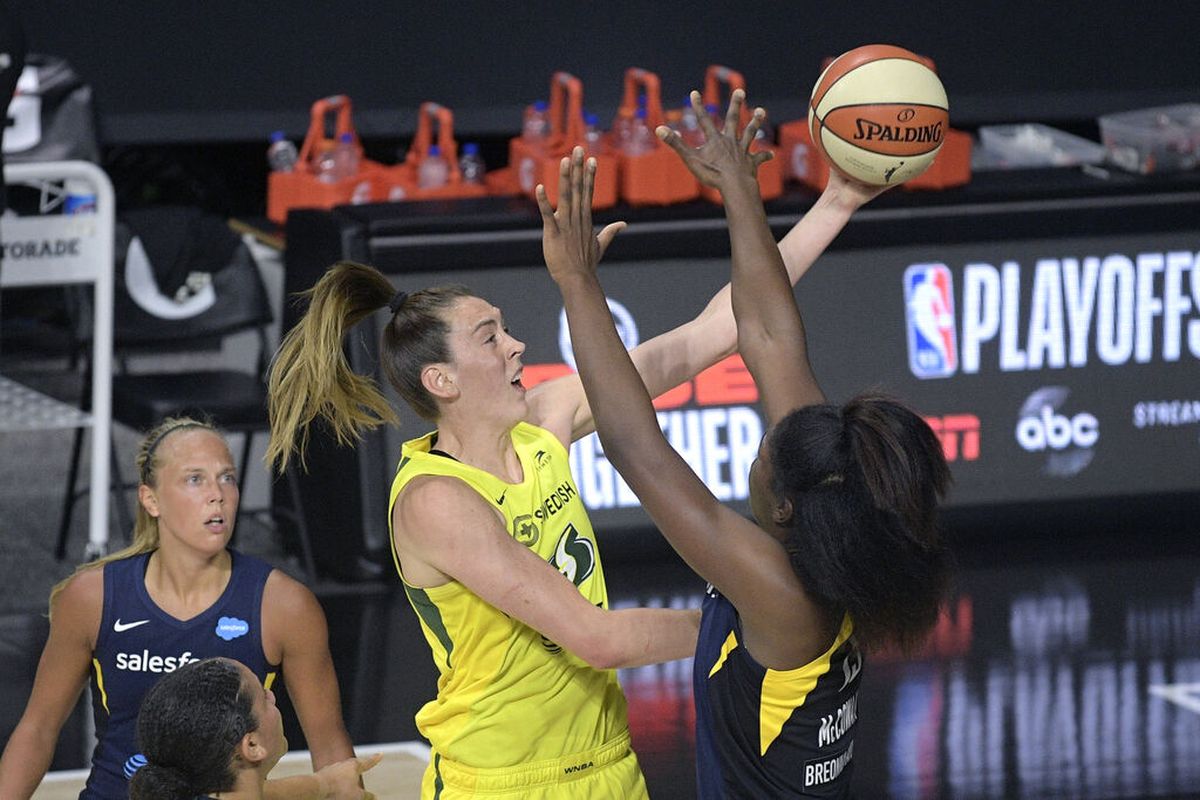 The Storm spent the past two months grinding and battling for seven days off last week, which they believe is essential toward their quest for a fourth WNBA title in franchise history.

Now the question heading into Sunday’s noon Game 1 in the best-of-5 WNBA semifinals is whether No. 2 seed Seattle will come out rested or rusty against No. 4 Minnesota.

“We’ll find out when we get on the court, which one we got,” forward Alysha Clark said during a Zoom call. “We knew this week was going to be huge for prep and getting everybody back healthy and getting that time to just be able to talk through some stuff and shore up some stuff.

“We’ve been getting up and down and we’ve been playing so hopefully we should be sharp.”

Backup guard Sami Whitcomb added: “You just have to be ready to go. These are the moments that we play for. I would be surprised if you didn’t see us come out looking well-rested versus rusty.”

Storm stars Breanna Stewart (left foot tendinitis) and Sue Bird (left knee bruise) are expected to start and won’t be saddled with minutes restrictions after sitting out the final two games of the regular season to recover from what both described as relatively minor injuries.

Still, neither has played in the past 11 days during a time when championship contenders would prefer to carry momentum into the postseason.

Stewart’s return seems less problematic considering she played in the second half of the Sept. 9 game in which she tweaked her foot.

“I wanted to play the last two games of the season just to help make sure we finished strong, but it probably wouldn’t have been my smartest decision if I was to play,” said Stewart, who averaged 19.7 points, 8.3 rebounds, 3.6 assists, 1.7 steals and 1.3 blocks during 20 regular-season games after sitting out last year due to an Achilles injury.

Stewart added: “It was something that just happened. I just stepped the wrong way and I’m happy that it was scar tissue and nothing else. When I feel a pop or anything like that when I stop, obviously that’s going to freak me out a little bit.”

Meanwhile, Bird has played just 11 games due to a bone bruise that occurred July 28 in the first matchup against Minnesota, a 90-66 Storm victory. She re-aggravated the injury Sept. 9.

“Being in and out and in and out, that’s been tough,” said Bird, who averaged 9.8 points and 5.2 assists while shooting 49.4% from the field and 46.9% on 3-pointers – both career highs. “It’s probably been the most mentally challenging season I’ve ever been in. And then you add all the wobble aspects to it, but those pale in comparison to be honest to what I’m feeling from a basketball standpoint.

“Right when I was getting into my groove, I had to sit down again. So that’s kind of disappointing. But I’ve also learned through my career, I can handle a lot mentally. Hopefully, I’ll be back in my groove once the playoffs start.”

The Storm will have to stop Sylvia Fowles, a six-time WNBA All-Star who owns the league’s all-time rebounding record.

Fowles appeared in just seven regular-season games due to a calf injury before returning Thursday.

“She creates a whole different set of things you need to do,” coach Gary Kloppenburg said. “She’s so powerful inside. They’re more of a power (team) with her. Without her, I thought they adapted pretty well. They became more of a perimeter-oriented team. They shot a lot of 3s with pretty good efficiency.”

During the first matchup against Minnesota, the Storm relied heavily on backup center Mercedes Russell to hold Fowles to 15 points and 11 rebounds.

“You want to keep a big on her,” Kloppenburg said. “I could see using Mercedes on her just because she’s so powerful.

“We would definitely try to match up accordingly. … You have to have a couple of different ways to go after her, especially if she gets going good. She’s so powerful and definitely one of the best centers we’ve had in our league.”

Fowles, the 2015 and ’17 Finals MVP, is the only holdover from a Lynx dynasty that won four titles and made six championship appearances during an eight-year span (2011-17).

Without Fowles, the Lynx have turned to their young trio of forwards, Napheesa Collier (16.1 points per game and 9.0 rebounds per game) and Damiris Dantas (12.9 ppg. and 6.1 rpg.) and point guard Crystal Dangerfield (16.2 ppg. and 3.6 assists per game), the 2020 rookie of the year.Former Minnesota forward Natasha Howard, who was traded to Seattle in 2018, credits Cheryl Reeves, the 2020 WNBA coach of the year winner, for revamping the roster and keeping the Lynx in title contention.

“It’s a huge change from me being there,” Howard said. “You can see the changes she’s being doing. She’s been doing a good job and they’ve been following her lead.”

Will overconfidence undo the Storm after two blowout wins over the Lynx?

At first glance, it seems as if the Storm caught a break when No. 7 Connecticut upset No. 3 Los Angeles in the second round to advance to a semifinal matchup against No. 1 Las Vegas.

Most WNBA observers predicted a Seattle-L.A. pairing in the semis and a reprisal of their classic Sept. 4 matchup, which ended with Jewell Loyd’s miraculous 3-pointer as time expired for a 90-89 Storm victory.

Theoretically, No. 5 Phoenix, which lost 80-79 to Minnesota in the second round, might have given Seattle a stiffer challenge considering the Mercury pushed the Storm to an epic five-game-series in the semifinals in 2018.

In the past couple of days, the Seattle players have been gracious with compliments about a Lynx team that’s been considered an underdog for most of the season while compiling a surprising 14-8 record.

“They’re a formidable team,” Kloppenburg said. “They’re well-coached. They’ve got three-point shooting. They’ve got some skilled guards. We played pretty well against them in the regular season, but it’s a whole new season now. I’m anticipating an intense battle with them.”

Seattle, which swept the two regular-season games by an average of 19.5 points, has won six straight games against Minnesota, including a 103-88 victory on Sept. 6 and an 84-74 win in the first round of the playoffs last year.

“I don’t think the regular season really matters as much at this point,” Bird said. “It’s a five-game season and you just have to take it one game at a time. It’s all cliché, but it’s really true when you’re in these moments. … You just have to go in and not worry about what happened in the past.”