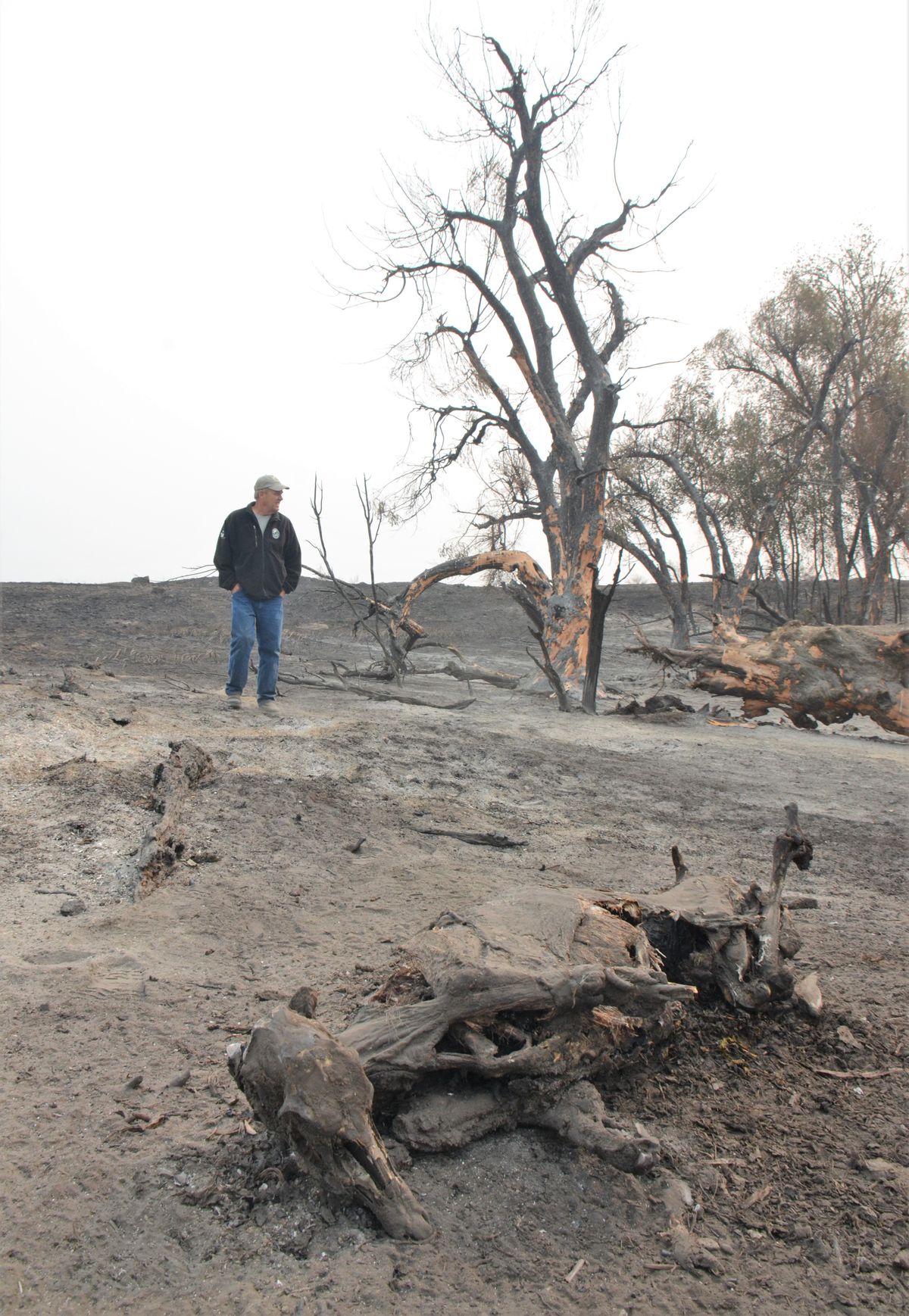 The immediate public concern as wildfires have ravaged portions of Eastern Washington this month is the human suffering, destruction of property and the pall of hazardous smoke. Behind the headlines is the silent anguish of wild creatures.

Creating puffs of ash and dust with each step on Thursday, Mike Finch surveyed damage in a portion of the Swanson Lakes Wildlife Area south of Creston. Scavenging ravens led him to the charred carcasses of a mule deer and eight porcupines – within 100 yards of each other.

The critters had sought refuge from the surrounding sagebrush in what had been a 2-acre oasis of rushes, cottonwoods and aspens as Labor Day’s gale-force winds whipped flames from a downed power line. The Whitney Fire went on a rampage over 128,000 acres in Lincoln County, including 95% of the 40,000 acres involved in the wildlife area and associated federal lands managed primarily for wildlife.

“Some animals can run or fly or go into burrows to survive a fire, but not porcupines,” said Finch, the Washington Department of Fish and Wildlife assistant area manager. Even the birds and the fleet-footed can get trapped by a fast fire, he said as he passed the deer.

Two dead coyotes were found a few miles away in den too shallow to protect them from the intense heat.

But this obvious gruesome carnage is not what concerns wildlife managers the most.

Eastern Washington blazes, including the Evans Canyon, Pearl Hill and Whitney fires, have consumed roughly a half a million acres of shrub-steppe habitat critical to species from amphibians to mule deer from Yakima north to Brewster and the Colville Indian Reservation.

Primary recovery areas for endangered pygmy rabbits have been devastated in the Sagebrush Flat Wildlife Area of Douglas County.

“Sage grouse winter forage is virtually 100 percent sagebrush, and sage has taken a big punch from these fires in Yakima, Douglas, Okanogan and Lincoln counties,” said Mike Schroeder, WDFW grouse specialist. Clinging to existence on only 8% of their historic range in the state, about half of their remaining sagebrush habitat has gone up in smoke in recent weeks.

“That’s a huge impact for one year,” Schroeder said.

“This might be the nail in the coffin for sage grouse in Lincoln County,” said Kim Thorburn, a member of the state Fish and Wildlife Commission and a birder who has volunteered for years to monitor prairie grouse at Swanson Lakes.

Burning disturbance generally spells long-term good for most wildlife that have evolved with wildfire in Western landscapes. But the National Audubon Society has reported that rising global temperatures and shifting rainfall patterns threatens extinction for two-thirds of North American bird species. The trend toward bigger, hotter and more frequent fires is not positive for many wildlife species.

This summer’s fires nearly erased what remained from 12 years of translocations and other efforts to reestablish native sage grouse in Lincoln County, Thorburn said.

“Washington’s shrub-steppe ecosystem was already one of the state’s most endangered at 40% of its historic extent due to agricultural and other human development fragmentation,” she said.

Swanson Lakes sage grouse had suffered a blow from a bitter February storm in 2017 that blanketed the area with wet, wind-packed snow that denied the birds adequate cover and forage for several weeks.

“The population of about 40 birds plummeted to 10 males on one remaining lek that spring,” Thorburn said. “This spring, we counted only four males strutting. And now the fire – the lek is in a sageless moonscape.”

The statewide sage grouse population was pegged at 770 birds in May, an optimistic number considering that notable fires have licked into important habitat in the past six years. But this season’s fires have impacted all the mating grounds in the state, Schroeder said. “They need sagebrush around their leks, and it’s mostly gone,” he said.

Also burned this season, so far, is at least 47% of the state’s habitat for Columbian sharp-tailed grouse, another state-listed threatened species, Schroeder said.

Sharptails thrive in grasslands mixed with pockets of trees and shrubs, but the statewide population estimated at 710 birds this spring has lost a high percentage of mating areas. For example, all seven leks associated with a population of 210 birds in northwestern Douglas County were torched on what Schroeder dubbed “the worst Labor Day ever.”

“The burn was complete, leaving those birds vulnerable to weather and predation,” he said.

“A 200,000-acre fire in Nevada isn’t so devastating because there’s still surrounding habitat that’s occupied (by sharptails). That’s not the case at Swanson Lakes, where fire has impacted virtually all of some 125 birds. Where do they go? There’s no connection to other populations and year-round habitat.”

That means when habitat recovers, there are few sharptails to return, he said.

Sharptails had been holding their own at Swanson Lakes and adjacent federal lands since a struggling population was boosted by birds translocated from other states from 2005-13.

District wildlife biologist Michael Atamian holds the resilience of bunchgrass as hope for sharptails at Swanson Lakes. “Sagebrush takes 20 years to reestablish,” he said, “but if we can get some rain, bunchgrass can come back relatively fast, and sharptails nest under bunchgrass.”

Swanson Lakes and other state wildlife areas have undergone years of field restorations and vegetation improvements that will help speed wildlife habitat recovery. “When we evacuated the office, I grabbed my restoration book with 28 years of records on planting times, what seed ratios worked and which ones didn’t,” Finch said. “That information will be valuable going forward from here.”

Since 1995, Finch has been involved with restoration on 1,931 acres of formerly grazed sage and grassland on the 21,000-acre wildlife area.

Swanson Lakes staff already is applying for federal grants for reseeding burned areas to kick-start recovery and combat invasions of cheatgrass and weeds. The Spokane-based Inland Northwest Wildlife Council and other sportsmen’s groups are fundraising to help support the effort.

Most of the wildlife area’s buildings 10 miles from Creston survived the conflagration. Recent excavation of a big gravel parking lot helped hold back flames.

Siding was curled on the main office and Finch put out fire that had caught hold on the wooden porch to save the building where restoration efforts will be based, once power is restored.

“Some of our neighbors weren’t so lucky,” Anderson said. “They’re hurting and we’re hurting for them.”

Some “Graze It or Blaze It” T-shirts are showing up in the area suggesting that state efforts to restore habitat and fence out livestock may have contributed to the intensity of the fires and damage to private property.

“In reality, the fire was indiscriminate,” Anderson said. “With 50 mph wind gusts, the fire burned grazed land, too.”

“It takes your breath away to watch a career of work go up in flames,” he said. “It’s a gut punch.” But he said he’s inspired by the resilience of the landowners with whom he works .

“These farmers and ranchers have suffered heavy losses to their land, structures and livestock, yet they have a direct connection with wildlife,” he said. “They’re concerned.”

WDFW offices from Spokane to Wenatchee are getting phone calls from landowners who want the agency to consider restricting fall hunting seasons to take pressure off deer and birds that have lost their forage base.

“We want to be sensitive to those concerns,” Braaten said, “but hunting is actually a good tool in this situation to reduce the number of deer on the landscape so they don’t deplete remaining habitat and starve during winter.”

Feeding the deer isn’t recommended in the wake of this year’s fires because of the chance of congregating the animals to spread disease and become roadkill, he said.

“Meanwhile, there are signs of hope everywhere if you look,” he said, telling a story of a farmer who noticed a gray blob in a vast crop field blackened by the Pearl Hill Fire. “He walked up the hill to investigate and found it was several sandhill cranes taking a break from their migration in a little patch of green canola that had been spared by the flames.

“He told me it brightened his day. That’s powerful coming from a man who had just lost his home.”

Waterfowl on the ponds, hawks flying overhead and tracks of deer, birds, snakes, rodents and lizards in the ash are also welcome signs of life as the Swanson Lakes staff scrambles for restoration resources.

Fire lines created by dozers must be regraded and seeded and at least 6,500 fence posts in the 60 miles of perimeter fence will need to be replaced to keep out neighboring cattle.

“Working on the impacts of the fire will probably consume me to my retirement,” Finch said.

The rate of wildlife survival and recovery will hinge on nature’s cooperation with rain, a fall green-up and a mild winter.

“That will play a big role in how much wildlife we see here when the wildflowers sprout from the ash and bloom in the spring,” Anderson said.