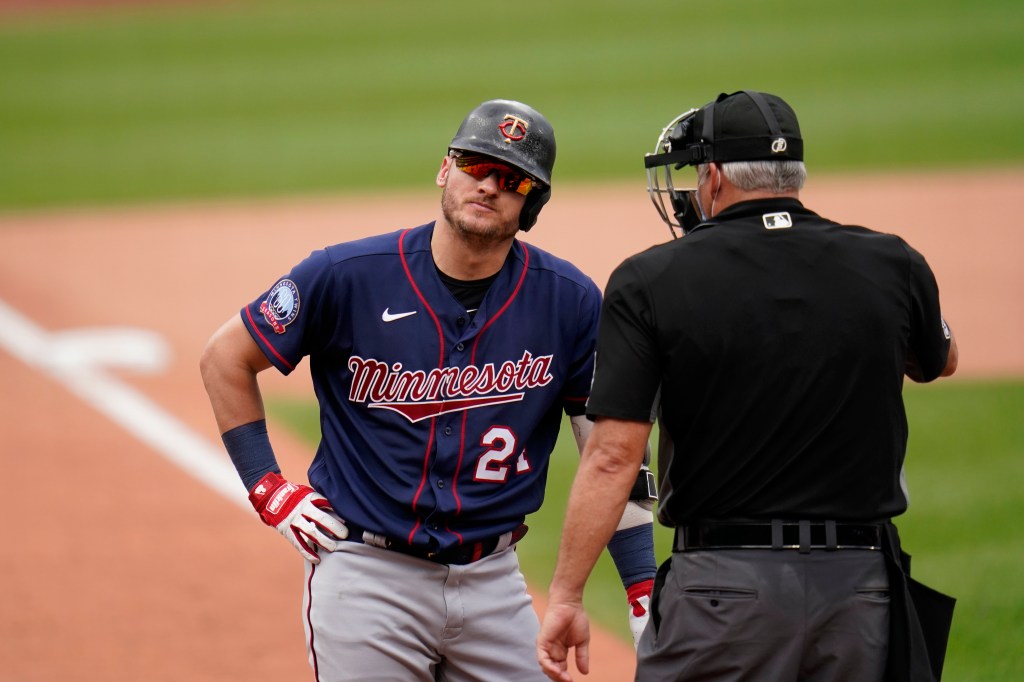 CHICAGO — Josh Donaldson has no regrets about the events of Thursday’s game, no apologies to dole out after smacking a home run and then kicking dirt over home plate, which earned him an ejection during an important game against a division rival.

“I think I nailed it, actually,” Donaldson said Saturday.

Speaking to the media over Zoom for the first time since the incident, Donaldson talked about the need for players to hold umpires accountable for their actions. The subject of Donaldson’s ire was Dan Bellino, the home plate umpire during Thursday’s game against the White Sox.

During an at-bat in the sixth inning of a game that was tied 2-2, Bellino called a strike on a 2-0 pitch that Donaldson objected to. That prompted Twins manager Rocco Baldelli to make a trip out of the dugout to try to defuse the situation.

Donaldson said he asked Bellino three times where the pitch was at.

Donaldson had been upset over calls earlier in the game, too. And as he crossed home plate, he decided it was his responsibility to do something. To make a point. To give Bellino the attention Donaldson said the umpire craved.

“The players are the only ones who can hold these guys accountable because there’s no institute of fines or institution of suspensions for these guys,” he said. “They just go out and show up every day at 6 o’clock and they’re out of here 30 minutes after the game. It doesn’t matter. It doesn’t matter to them. They don’t realize we’re playing for our families, we’re playing for our livelihood.”

Donaldson, who had also been upset at a 1-1 pitch earlier in the game that was called a strike, came prepared to the Zoom session, at one point reading off player statistics with a 1-1 count versus a 1-2 count. He followed that by saying that when an umpire “consistently isn’t doing their job correctly, that’s affecting our careers.”

Donaldson said he has not heard from the league about a fine but promised that when he got his “pieces of paper from MLB,” he would then be “as vocal as I want about the certain individual that this was about.”

Baldelli said he has talked to Donaldson multiple times since the incident. Baldelli said the third baseman, who signed the richest free agent contract in team history this offseason, knows the Twins are at their best when he is out on the field but at the same time was “beyond frustrated” with what had transpired.

“I think he, in some ways, probably understands that it wasn’t something that helps our team, but also something that I don’t know if bigger picture is totally regretful for it,” Baldelli said. “He feels like he needed to find a way to let out his frustration.”

Asked Saturday by Fox Sports North broadcaster and former Twin Justin Morneau if he had accomplished what he wanted, Donaldson said he did.

“I heard, Justin, you had a lot of people texting you and saying they were embarrassed,” he said. “Well, I’m not. This is my livelihood and this is part of what makes me the player I am, and at the end of the day, if I have something on my chest, that’s going to be what it is.”