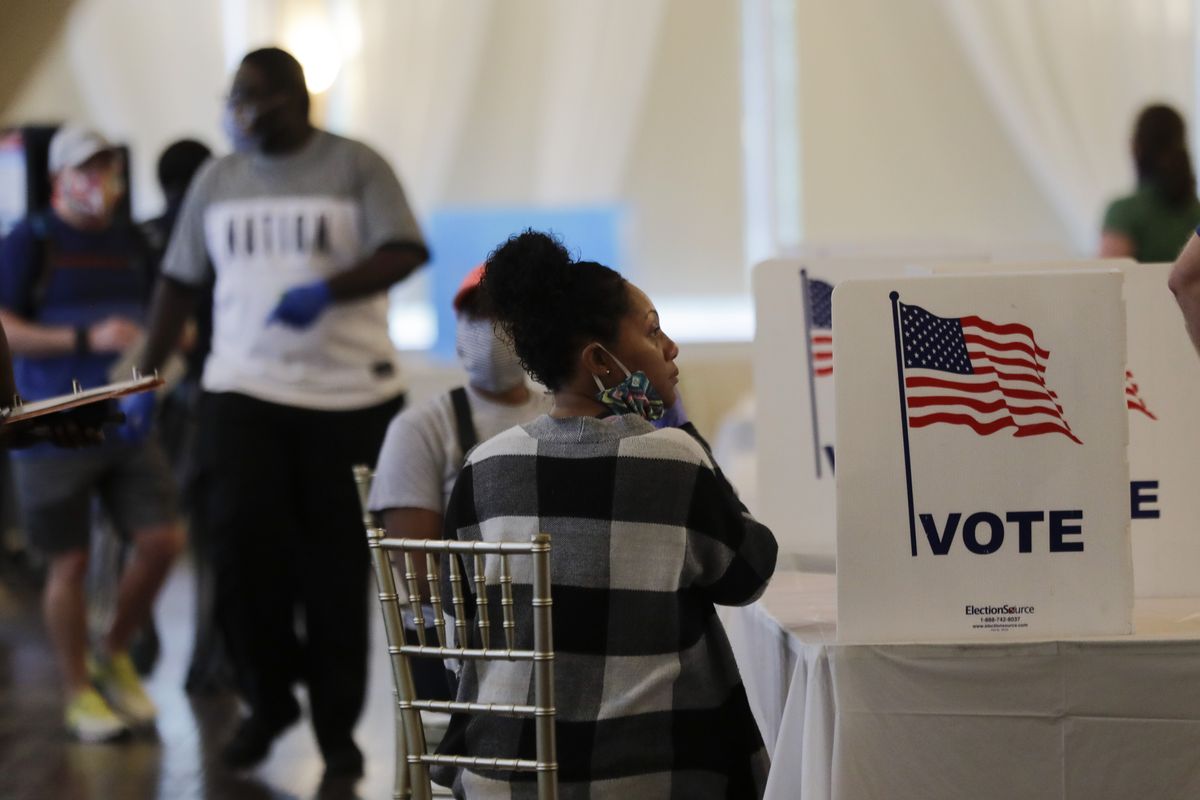 The problems were most acute in Fulton County, which includes most of Atlanta and is a Democratic stronghold in a traditionally red state. State leaders launched investigations while election officials in the most populous county said they did the best they could in unprecedented circumstances.

Now, election officials say they’re making changes to avoid a repeat in November, as Georgia emerges as a potential presidential battleground, turnout is expected to set records and the coronavirus continues to rage.

With nearly 790,000 active voters, Fulton County accounts for about 11% of the state’s electorate. Voting problems in and around Atlanta in recent elections have become a national flashpoint because they disproportionately affect Black residents, who comprise just over half the city’s population.

The day after the primary, the front page of The Atlanta Journal-Constitution blared, “COMPLETE MELTDOWN” across a photograph of voters, many wearing masks, in a long line outside an Atlanta polling place.

Secretary of State Brad Raffensperger, a Republican, said the election went well overall but promised investigations into the election’s handling in Fulton and neighboring DeKalb County. The Republican speaker of the Georgia House said Fulton was particularly troubling as he called for an investigation of the primary process.

Voting rights activists and academics noted that predominantly Black communities saw some of the longest lines, which they said is especially worrisome given the history of Georgia and other Southern states suppressing Black votes.

“I’m not necessarily accusing folks of intentionally trying to disenfranchise Black voters. But if the outcome is that Blacks are bearing the disproportionate brunt of the decisions, then it is racial and it has to be adjusted,” Emory University political science professor Andra Gillespie said.

LaTosha Brown, co-founder of Black Voters Matter Fund, said she waited with voters who finally cast their ballots at 12:37 a.m. the next day.

“I think it is a combination of the failure of leadership, systemic and structural racism, and voter suppression that is alive and rampant in this state,” she said, adding that long lines and other problems can lead to voter apathy.

The night of the primary, Fulton County elections director Rick Barron spoke frankly with reporters about challenges his staff faced.

He said the pandemic was the root of many of the problems. It caused poll workers to drop out, complicated poll worker training on a new election system and led to a significant number of polling places having to be changed or consolidated.

To limit potential exposure to the virus, the secretary of state encouraged people to vote by mail and sent absentee ballot applications to active voters.

But then the head of Fulton County’s absentee ballot section tested positive for COVID-19 in early April and another staffer died from the disease, causing the office to close for several days just as absentee ballot applications began to pour in. Technical glitches slowed the processing of applications received by email. The county struggled to catch up, but some voters never received requested ballots and ended up voting in person.

A report released last week by a legislative panel found that most of the problems stemmed from the coronavirus, first-time statewide use of new voting equipment and the increase in absentee voting. Investigations by the secretary of state’s office found that Fulton County failed to process some absentee ballot applications and that poll workers were inadequately trained, among other problems.

Amanda Clark Palmer, an attorney for the county, acknowledged the problems but said the county’s election officials and workers demonstrated “heroic” efforts.

“They do not deserve to be vilified, and yet that is how they feel right now being the only county that has been called to account before this board for the June 9 election,” she told the state election board earlier this month.

To be sure, problems during the primary were not limited to Fulton County. Judges ordered polling sites in 20 of Georgia’s 159 counties to stay open past the 7 p.m. deadline because of late openings or other issues.

But Fulton seemed less able to handle problems than other counties, said Chris Harvey, the secretary of state’s elections director.

“We weren’t trying to vilify anybody, but we also aren’t going to spare people’s feelings because the election in November is just too important,” he said.

Barron, Fulton County’s elections director, has vowed to learn from problems during the primary and improve.

Because of the coronavirus, the county had just eight early voting locations during the primary. It plans to have 30 during the entire three weeks of early voting before the general election, as well as two mobile voting precincts that will move around the county.

Unlike Election Day, when voters must use assigned polling places, Fulton County voters can cast ballots at any early voting location, including State Farm Arena, home of the Atlanta Hawks. It was the first NBA arena to be approved as a voting site, an effort supported by Los Angeles Lakers star LeBron James and his organization More Than a Vote, which aims to boost Black turnout.

About 100 people will staff three call centers to answer questions from voters or poll workers, who sometimes had trouble reaching the county during the primary. Every polling place will have a technician to troubleshoot equipment problems.

The county plans to hire about 2,900 poll workers, including hundreds who will be on standby in case some back out.

An important change is a big increase in places to vote or drop off a ballot. Fulton County will add 91 polling locations, bringing the total from 164 in June to 255 in November. The number of absentee ballot drop boxes will double to about 40, so that roughly 93% of county residents will live within 3 miles of one.

A new online portal to request absentee ballots set up by the secretary of state is making that process more efficient. It’s just one step state election officials are taking to help make the November election run smoothly in Fulton County and elsewhere, Harvey said.

“It’s about making sure that on Nov. 4 the only thing people are talking about are the results,” he said.