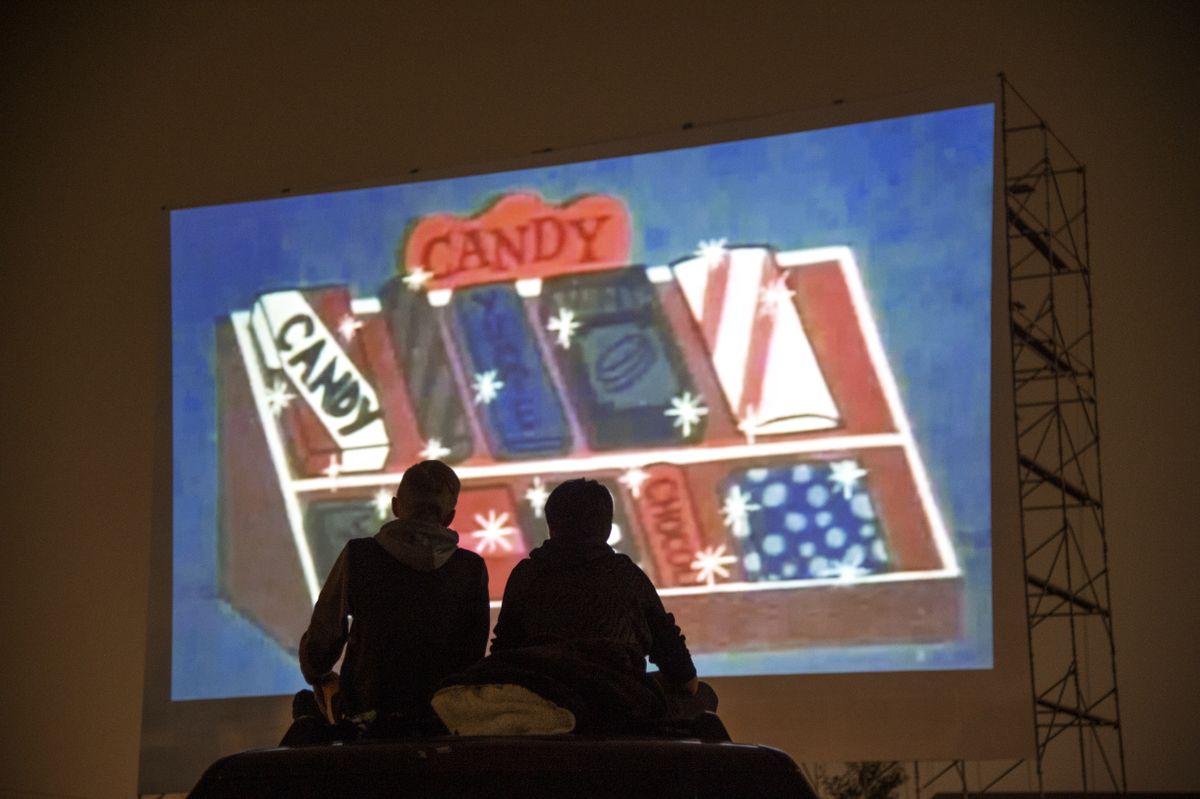 As a kid, Aaron Hudson’s family would make the hour-and-a-half trip from St. Maries about once a month to see a movie in one of Spokane’s drive-in theaters.

Later, Hudson and his friends would stack “literally six or seven people like a cord of wood” in the trunk of one of their cars to sneak the whole pack into a drive-in.

He said the ’80s were a better, simpler time, and he hopes to see a societal move back to that.

He hoped to give his son a taste of what his youth was like Friday night.

In a parking lot north of Avista Stadium, Hudson aimed the bed of his pickup, loaded with snacks, at a massive screen.

It was opening night for Spokane Drive-in at the Fairgrounds, which debuted with children’s movie “Sonic the Hedgehog.”

His son Easton Hudson, 8, and neighbor Brantley Connors, also 8, ran around the parking lot of over 250 cars waiting for the movie to begin.

A New Mexico-based company, Puma LLC, is renting the lot to show movies through the fall. Sunday will show “Grease.”

Jace and his dad, Blake, snacked on candy in foldable camping chairs in a pickup bed as they waited for mom Nicole and Jace’s two brothers, Hunter and Mason, to come back from the popcorn stand. The movie night was a reward for the kids “surviving” their first week of online classes.

Meanwhile, fiancés Sydney Lindgren and Robert Miller cuddled up in the bed of their 1977 Chevy truck.

Just a few days ago, the couple had been talking about the drive-in movies Lindgren used to regularly attend in Spokane as a kid. She saw the news of a drive-in starting earlier in the day Friday.

Lindgren said the pandemic has revealed how limited adults are today to hanging out in bars, while ventures like the drive-in movie are a healthy alternative. She could imagine locally run food trucks capitalizing on the event, too, she said.

It didn’t make sense to her when drive-in movies seemed to suddenly disappear from Spokane in the ’90s. The last permanent drive-in in Spokane shut down in 1994. It seemed to be part of a larger cultural change, she said.

“I personally blame it on Facebook,” Miller said. Lindgren laughed: “Which is funny because we found this on Facebook.”

Hudson pointed to the meth epidemic, addiction to technology and hostility between political parties as problems shredding at the fabric of society. He doesn’t allow Easton to use his tablet at the house, and the two spend a lot of time in the woods dirt-biking.

“Spokane used to be such a sleepy little town. It was so fun. Now you’re scared to let your kids out,” Hudson said. “When I was his age we could walk down any street.”

Hudson said times feel desperate. If people don’t learn to relax, accept each other’s differences and have fun, he said, he’s scared about what the future might hold.

Drive-in movies won’t fix things, he said, but they mark a promising shift toward something social and simple.

As he spoke, the parking lot lights shut off. A reel of 1960s cartoon clips began. Then, in a dripping, bloody vintage font, the screen asked viewers to weigh in on Facebook:

“What horror movies do you want to see in October?”