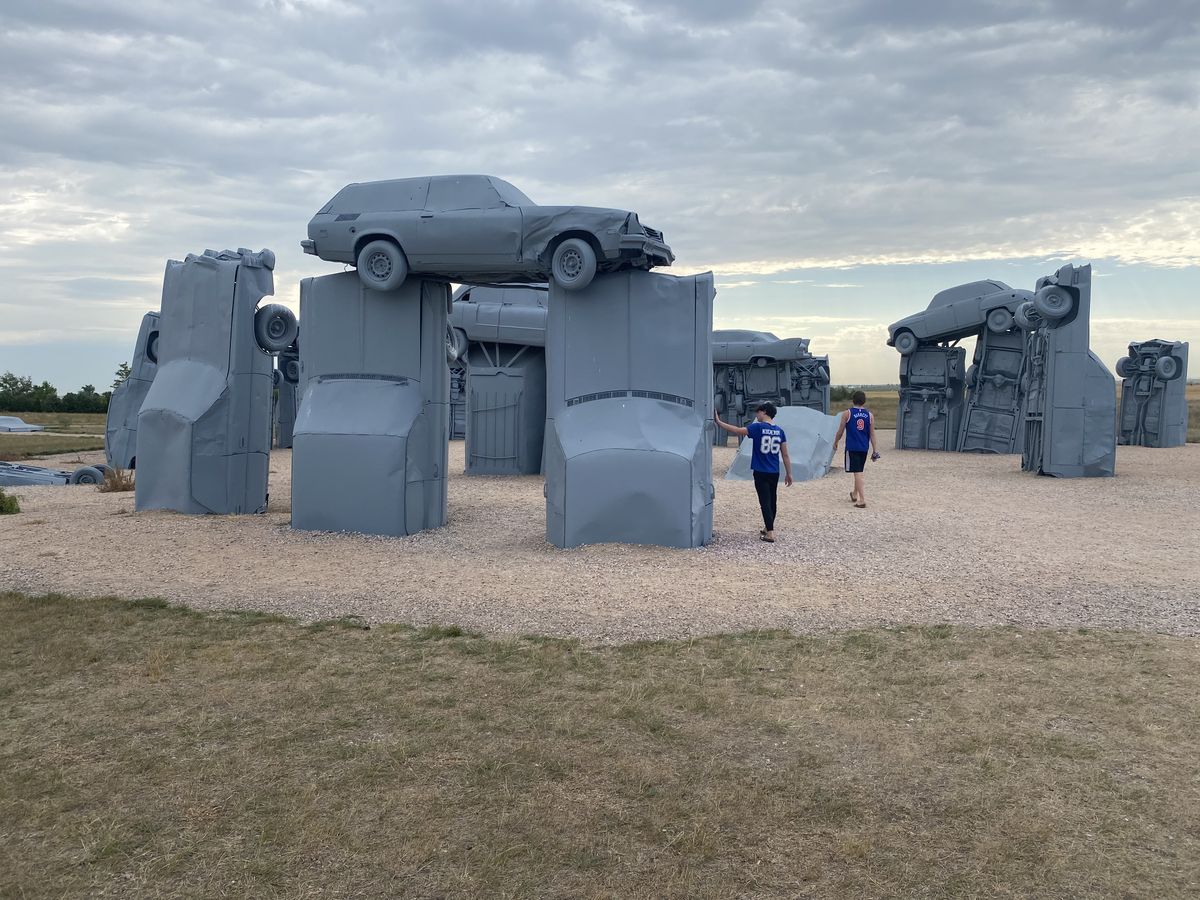 Deciding to embark on an all-American road trip might sound odd during the novel coronavirus. Driving across the entire country seems insane during a pandemic until such a journey is analyzed. If we’re primarily in our safe zone, our car, and make prudent decisions, we should be fine, we surmised.

After witnessing my son Eddie’s anti-climatic high school graduation in June, it was time to venture west with my family. Before flying in for the event in quaint Jenkintown, Pennsylvania, which is just outside Philadelphia, the plan was to book flights.

However, my son Milo, 15, who has a penchant for going against the grain, floated an out-of-the-box idea. “Can we drive to Spokane?” Milo asked. “It would be cool to go to some places we would never be able to see.”

After serious consideration, the plan was ratified. I stocked up at a grocery store the night before we departed on Friday afternoon with the goal of arriving in Kansas City, Kansas, by 9 p.m., which is where my favorite barbecue is served at Joe’s Kansas City.

When we left, Milo noted that someone recently set the Cannonball Run record driving from Manhattan to Los Angeles in just over 25 hours. “Sounds like fun,” I said. “I’ll pass.”

Eddie, 18, and I split driving duties, and the first bonus of the trip was evident almost immediately. There was no traffic since many were apparently staying at home. Our bathroom breaks were not at gas stations but hotels. We reasoned that the standard of cleanliness would be high, and we weren’t disappointed.

There was no need to stop for sleep since I handed off driving duties to Eddie at the midpoint. When I awoke, we were firmly in the Midwest and another time zone. I told Eddie not to speed. “What makes you think I was speeding?” he said.

I followed with an intense stare. “OK, I was driving a little over the limit, but I didn’t see any anyone pulled over or any cops,” Eddie replied.

“That doesn’t mean you should take chances,” I said. “Don’t speed.” However, Eddie was correct. There didn’t seem to be much law enforcement on the road.

After plowing through much of the snack arsenal, we finally arrived at Joe’s, and it was well worth driving a little off course for the experience. I tried the Rocket Pig, pulled pork tossed in a sweet-hot competition BBQ glaze, bacon, pepper jack, BBQ mayo and fried jalapenos with a side of sausage. We arrived late, and few customers were present.

No one was within 20 feet of us during dinner. Eddie plowed through a pulled pork sandwich, while Milo devoured the Chicken Z-Man, a smoked pulled chicken with smoked provolone topped with two crispy onion rings. An extraordinary dinner nearly halfway through our trip.

While cleaning up, a member of Joe’s team asked where we were driving from, and when I provided details, his eyes bugged out. “Since you traveled that far, I have something for you, ” he said.

The 20-something college student, who has yet to travel much, noted how much he envied our journey and gifted us with 2 pounds of burnt ends for the road.

We were taken with his unexpected generosity. Minutes later, we were hit with more kindness. On the way out, I drove to the parking lot of Arrowhead Stadium, home of the Kansas City Chiefs, and to Kauffman Stadium, the Kansas City Royals ballpark for my sons’ benefit.

As soon as we pulled up, a security guard informed us that we were prohibited from the area. However, Milo quickly persuaded him to let us check out the home of the Chiefs, and he escorted us to an off-limits spot between the venues for photos.

By morning, we arrived at Carhenge in Alliance, Nebraska. It’s a quirky but cool art installation by artist Jim Reinders. It’s a tip of the cap to England’s storied Stonehenge. However, instead of standing stones, Reinders arranged 39 vintage American automobiles, primarily in gray paint, in a circle.

Carhenge, which was assembled in 1987, also features a couple of cars in various colors and one that visitors can autograph. There wasn’t a soul around. No problem with social distancing.

An hour later, we stopped at a Walmart in the High Plains of Nebraska. “I swear people are staring at me because I’m wearing a mask like I’m a criminal or something,” Eddie uttered when we hit the road again. “That’s funny since didn’t criminals wear masks out in the old West like in ‘Butch Cassidy and the Sundance Kid,’ ” Milo cracked.

Few faces were covered, but it was nothing compared to what we experienced next.

“I can’t believe it,” Eddie said as we entered Mount Rushmore. “It’s as if the people here don’t believe there’s a pandemic. This is so messed up.” About 10% of those visiting the world-renowned destination sported masks. After gazing at the stone sculptures, we hit the presidential trail, which was not well-traveled and led us back to the lot and away from the primarily unmasked masses.

“That was really cool,” Eddie said. “But if we’re going to get the coronavirus, we would have gotten it here.”

For lunch, we stopped at Wall Drug Cafe before we visited the Badlands. Wall Drug, which shamelessly self-promotes for miles on I-90, offers down-home roadside food such as bison burgers and chicken sandwiches, which were fine. Taking the temperature of those inside was more interesting than the fare.

“There was a guy around here the other day who was complaining about President Trump,” a heavily made up middle-aged local woman said. “I told him to get out of here because you have to respect your president.”

A quarter-century ago, I visited the Badlands briefly and felt as if I slighted myself, so I was thrilled to return. There was hardly anyone in the underrated national park, which is unique courtesy of its sharply eroded buttes and striking pinnacles. The Badlands, sacred ground for Native Americans, almost felt like the moon since it was so empty.

We could hear herds of cattle from miles away. On its mixed-grass prairie, we encountered a number of cute prairie dogs. A herd of bison casually meandered through the prairie, and a number of bighorn sheep stared at us with those black, seemingly lifeless eyes just as we were departing the park.

The following morning, we stopped at Dickey’s Barbecue Pit in Gillette, Wyoming. For a chain, Dickey’s is tremendous. Delicious, tangy brisket and free ice cream to boot. The only issue we had is that no one in the kitchen or behind the counter was sporting a mask. But, as Milo says, “A dog’s gotta eat.”

I was reaching for the suntan lotion when we pulled up to Little Bighorn Battlefield. It was scorching with no tree cover over the area, which memorializes the U.S. Army’s 7th Cavalry and the Lakota and Cheyennes in one of the Native Americans’ last armed efforts to keep their way of life alive.

It was fascinating for Eddie, who handed in a Little Big Horn project for history the prior year, and it was an education for Milo. Again, there was a dearth of visitors, perhaps due to the weather and the pandemic. Bighorn and the Badlands were a reminder of how wide open spaces are the places to be during the coronavirus.

Driving across Montana was akin to traveling down Florida. The Big Sky state, more than 500 miles and exits(?!), is endless. There were no more touristy stops along the way. Next up was Spokane, which was less than nine hours away.

While waking up in the middle of the night, I saw that Eddie was flying at 110 mph on an 80 mph stretch of I-90 while glancing at his phone. I couldn’t sleep after that and told him that there was no need to time travel.

We rolled into Spokane early Monday morning. That was the end of our trip but only the start of our summer traveling adventures.

The journey only whet our appetite for more road runs. A number of my sons’ travel baseball tournaments were canceled in cities such as Seattle and Portland due to COVID-19. On free weekends, we traveled since we believed that summer is probably the safest time to make like Jack Kerouac.

It felt like a Portlandia sketch when we were looking for protesters in Portland. How couldn’t we find any rabble rousers since, according to some pundits, they were ubiquitous. Also, reports were that Portland was ablaze, which wasn’t true.

We finally stumbled upon a few folks on the corner of an intersection with Black Lives Matter signs. On a side note, when Milo set foot in Oregon, he completed his run of the 48 contiguous states. And then there was the soundtrack. Songs such as Simon and Garfunkel’s “America,” the Velvet Underground’s “Who Loves the Sun” and “Young Folks” by Peter, Bjorn and John kept us sane.

It hasn’t been car-only this summer. After scoring a very cheap flight to San Francisco, we walked along the streets of a ghost town. I wondered if the latest version of Stephen King’s “The Stand’ was shooting throughout the city. The highlights: revisiting the Mission’s La Taqueria for my favorite burrito in the world, the chorizo, and gazing at Alcatraz, as desolate as Fisherman’s Wharf.

Since San Francisco was in post-zombie apocalypse mode, we ventured to Santa Cruz. The rides, save the train that circles the amusement park, were dormant, but the beach was vibrant. We selected a socially distant spot and built sandcastles in relative solitude before diving into the Pacific.

The problem with previous San Francisco trips was spending a fortune to stay in a downtown hotel. Why break the bank for a bed you’re never in? The big tip of this trip is that we stayed in the Red Roof Inn just south of the city in Burlingame.

Our room on the top floor, the fifth, was pristine. We had an amazing view of the city, which is just a 10-minute drive away. Accommodations at the Red Roof, where parking is free, are less than $75.

What we experienced over summer is that the upside of the coronavirus is that every hotel room down to the budget level was spotless. The same could be said about planes.

We lived to tell the tale because we followed the protocol. We wore masks, kept our distance and used common sense. When my sons and I were playing bubble hockey in a hotel lounge, all of a sudden we noticed that the bar quickly morphed from empty to packed, and we left.

There are no guarantees with the invisible coronavirus. However, we took a calculated risk, and we’ll always look back on our trip across the States as the silver lining of the coronavirus.

My children and I learned so much about our country and noticed how kind people are, particularly in Spokane, during a very difficult time.

“People were really cool wherever we went,” Milo said. “They were nice and patient. It’s much different seeing things in person as opposed to on TV. After experiencing everything in so many places, I think there’s hope despite how crazy it is right now.”