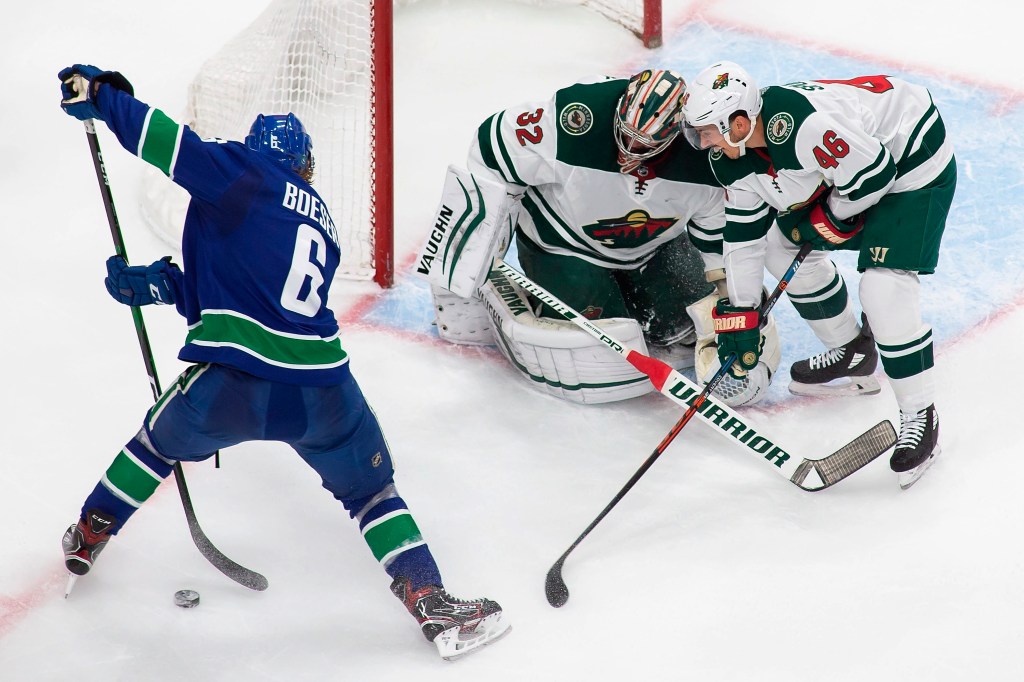 So much for that goaltender battle.

While coach Dean Evason refused to tip his hand about his starter in the days leading up to Game 1 of the qualifying series, there won’t be any question who is starting Game 2.

Not after Alex Stalock pitched a 28-save shutout to lead the Wild to a 3-0 win over the Canucks to start what could be a wacky postseason run.

That said, Stalock would be the first person to say this was a team effort. Whether it was Kevin Fiala getting the scoring going, or Jared Spurgeon recording the quietest three-point game in history, or Ryan Hartman playing solid on both ends, everyone rose to the occasion on this particular night.

It started right from the drop of the puck.

If anyone was worried the game wouldn’t have playoff feel with no fans in attendance, Marcus Foligno did his part to inject some nastiness. He dropped the gloves with Canucks winger Micheal Ferland in the opening minutes of the first period and proceeded to unload a bevy of haymakers.

A little more than about 90 seconds later, Fiala gave the Wild the lead with a snipe on the power play. He collected a pass from Jared Spurgeon right off the faceoff and unleashed a shot that leaked past Canucks goaltender Jacob Markstrom.

From there, the Wild completely seized control, and likely would’ve ran away with the win had it not been for Markstrom rebounding between the pipes. His most notable saves came on Eric Staal and Zach Parise from point-blank range.

That allowed the Canucks to hang around, and in the second period they finally started to test Alex Stalock with an array of shots in front. Luckily for the Wild, he was up to the task, making a handful of big saves, including a flashy glove save that showcased his confidence in the crease.

Midway through the second period, Jared Spurgeon proved the Wild with some much-needed insurance on the power play. He corralled a perfect pass from Staal, waited a split second, and beat Markstrom five hole.

That was more than enough as the Wild complete locked things down in the third period to hold on for the win.