A Grip on Sports: As July reluctantly melts away, August holds some hope for those who love sports – Fri, 31 Jul 2020 PST

A GRIP ON SPORTS • As July prepares to exit stage left, August is ready for its star turn. It won’t have to be all that locked in to look good, at least in comparison to the months that preceded it. In the sports world, August 2020 might even be considered a star.

• August is usually pretty hot, just not in the sports sense. The temperatures rise – that will be true again – but major athletic events fade. There is baseball, of course, and the opening of football camps. Some auto racing and golf, but little one would call can’t miss. Well, in a different-type of year, there will be a different type of August.

Major league baseball is still around, of course, trying to get its 60-game schedule in with as few hiccups as possible. But this year it is joined by the other big four sports. 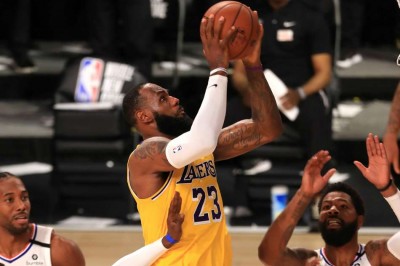 Basketball is represented by the NBA, which tipped off its season restart last night in Orlando, and the WNBA. Hockey begins its new beginning today in Canada. Both league will play in bubbles, trying to determine a title, all the while also attempting to keep the virus at bay. They’ve done a great job on the latter thus far.

Football is also joining the party, at least pro football is. NFL teams are in camp, undergoing a round of testing before beginning any on-field activities. The league is scattered around the country, counting on the diligence of its players to keep COVID-19 out of the equation. The Miami Marlins would like a word about that.

The unpaid players associated with college football, however, are still waiting to find out if they’ll be back on campus this month, practicing and playing. The unknowns about the season still probably outnumber the knowns, though each day, seemingly, brings another change in schedule or emphasis. And financial implications for local schools (see the EWU section below).

There are two big golf events planned, the PGA Championship in San Francisco next week and the FedEx Cup tournaments starting later in the month. The U.S. Open tennis tournament is also on track to begin the final day of the month, though the field has already been whittled enough it will probably be more like the Delray Beach Open than one of the four Grand Slam events.

And lest we forget, the Indianapolis 500 is scheduled for Aug. 23, nothing like its traditional date, but fitting for 2020.

Then again, the only thing that really seems to fit in 2020 is a face mask.

• As we mentioned above, the NBA returned last night. There were two games in Orlando, the second of which – the Lakers’ last-second win over the Clippers – garnered most of the attention.

There was also a choreographed pregame event, aimed at showing the league’s support for the recent civil rights protests and its demands for change. Then the games occurred, being played on a regulation court in a ballroom-sized facility under the strictest quarantine rules.

Just another illustration of how life has transformed in a multitude of ways since March.

WSU: Around the Pac-12, if you had the conference leading the way with good decisions concerning football in your office pool, you may just win. As Jon Wilner documents, the conference’s path through this summer has been less bumpy than many of its peers. … There was a big shakeup in the Oregon State baseball staff yesterday. … The Beavers have done a good job of keeping the virus at bay thus far. … The countdown of key Oregon football players continues. … The toughest Colorado football player would like to see a little more success for his team.

Gonzaga: In the WCC, will Yoeli Childs end up running for political office some day? I’m sure he would garner more votes in Spokane than most ex-BYU players.

EWU: The Eagles have been battered in a myriad of ways since the pandemic started. And now their athletic department budget faces another huge hit, as a $750,000 payday for a game at Florida goes out the window. Ryan Collingwood has this story about how the SEC’s decision to forego nonconference games impacts Eastern Washington’s bottom line.

Golf: The Lilac Invitational will go on, even if not as scheduled. The event, which raises money for Shriners Hospital, has a new date and a smaller field. But, as Jim Meehan tells us, there are still quite a few players with local ties trying to win a championship. One of them is Eric Ansett, not only playing in his first Lilac, but playing The Fairways for the first time. … Derek Bayley made his PGA Tour debut yesterday.

Chiefs: The Stanley Cup playoffs begin today and there are a few local players involved. Dan Thompson checked in with Derek Ryan and others to see how hockey in the summer was treating them.

Mariners: Marco Gonzales and the M’s got a break yesterday. Mike Trout didn’t play for the Angels. They took advantage, taking an early lead, scoring a bunch of late runs and winning 8-5. … The M’s are in T-Mobile tonight. It’s the home opener. No fans, sure, but that’s not all that different (cue rim shot). … It’s been a slow start to the short season for most of baseball’s hitters. … Evan White has shown a good-to-great glove at first base. … The Mariners have decided to blow up their scouting department. Jerry Dipoto has fired some people and moved others around.

Seahawks: Jamal Adams met with the media remotely yesterday and he said all the right things. He’s excited to be in Seattle, his contract situation will take care of itself and, yep, the LOB was great. … Larry Weir covered the Adams’ trade and more in this Press Box podcast. His guest? The Athletic NFL writer (and S-R alum) Mike Sando.

• July isn’t going away without throwing one last high heater. My phone app tells me it will hit 102 degrees today. Though I’ve been trying my best to be good in what I eat, ice cream has to be on the agenda at some point, doesn’t it? And lemonade? Heck, it’s so hot I might even ice down a few adult beverages and see how they taste while sitting under the maple tree overhanging the back deck. If this were Twitter, I would put up a poll. You would have to vote for ice cream, lemonade, cold beer or all of the above. Those are the choices. I’ll let you know the results of the voting – my voting – tomorrow. Until later …